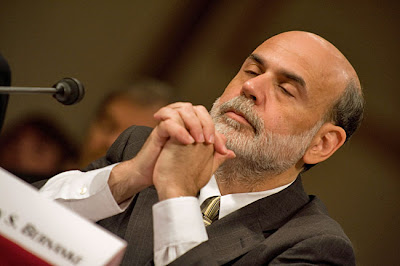 So, per the new policy announcement from the Fed, there's been a mini-debate on the blogs about how this decision came about. As I've said before, Scott Sumner was perhaps the most important person in the economics blogosphere pushing the idea that the Fed should adopt this new policy, which in turn certainly helped push it out into the media and intellectual mainstream. Thus there has been a round of applause online for Sumner.

But Michael Woodford, a big-name economist who wrote a recent paper advocating a Sumnerian policy, isn't sharing credit in this interview with Dylan Matthews:


DM: One big advocate of an NGDP target, on his blog and elsewhere, has been Scott Sumner at Bentley University. Did he influence your thinking on this?

MW: I don’t think it affected me. This theme is one that I had been pushing extensively even before the current crisis, both for reasons that relate to my general views on monetary policy, and the fact that I had been giving talks on responding to the zero lower bound in this general situation. So I already had a well worked out view of that kind. I don’t think it changed my mind about the importance of the particular themes.

(As an aside, file that in the "academics are assholes" folder. Woodford, god bless 'im, is the "world's preeminent monetary economist," but can't share even a smidgen of credit with some random blogger from Bentley University, even to just say "He certainly deserves some credit for properly understanding this issue and promoting it." High-status academics should be less afraid of this.)


I'm not so sure. Sumner has done heroic work, writing energetically about the power of Fed guidance for the past couple of years. There's no question that he's raised awareness of the topic, and he deserves kudos for that. At the same time, Ben Bernanke is one of the foremost monetary economists of our time, a guy who's written extensively about historical episodes where conventional monetary policy has lost traction. I honestly don't think he needed Scott Sumner to remind him of his options.

I know this sounds a little churlish, and I apologize for that. But I suspect the real backstory is a lot more complicated — and probably a lot more interesting, too. After all, Bernanke didn't just have a sudden brainstorm yesterday. He already knew the expectations channel could be an important tool. What Bernanke really accomplished yesterday was to get near unanimity from his Fed colleagues to give the expectations channel a try, something I suspect he's been working on for a while.

Where you come down on this question depends on whether you view this decision as determined by reason or by politics. Clearly Kevin is right that Bernanke is one of the preeminent monetary economists of the age—more than that, in fact, a man who made his academic career criticizing Japan for doing what he himself did for much of the last four years; namely, dither halfheartedly while the economy grinds through a period of prolonged weakness. Sumner's case for NGDP targeting (pdf) is pretty straightforward; it seems absurd to think that Bernanke wouldn't have anticipated it.

But on the political side of things, there is a lot more to consider. A lot of very rich and powerful people loathe the idea of the Fed taking the kind of extremely aggressive action implied by NGDP targeting, for whatever reason. Sitting governors have threatened Bernanke with violence for doing much less. The House of Representatives is riddled with cranks and goldbugs who yowl about Zimbabwe every time gasoline or milk goes up a nickel. The Federal Reserve board is stocked almost entirely with bankers who frankly don't care about unemployment, or even like it a little (downward wage pressure!). Etc.

So in this story Sumner's big influence on elite thought leaders is very important. He sparked a movement which provided cover and ammunition for those that advocated action, and a countervailing pressure in the media against those who would otherwise be too dumb or lazy to see through the likes of Ron Paul or Paul Ryan.

Economists usually write these kind of power dynamics out of their models. But I say this is where Sumner deserves some big credit. Not for thinking up NGDP targeting himself exactly, but for getting it out into the discourse and pressing it relentlessly.