By Ryan Cooper September 29, 2020
So Reality Winner, former NSA contractor, is in federal prison for leaking classified information — for five years and three months, the longest sentence of any whistleblower in history. She gave documents on how Russia had attempted to hack vendors of election machinery and software to The Intercept, which completely bungled basic security procedures (according to a recent New York Times piece from Ben Smith, the main fault lay with Matthew Cole and Richard Esposito), leading to her capture within hours. Winner recently contracted COVID-19 in prison, and is reportedly suffering some lingering aftereffects.
Glenn Greenwald has been furiously denying that he had anything at all to do with the Winner clusterfuck, and I recently got in an argument with him about it on Twitter. I read a New York story about Winner, which clearly implies that she was listening to the Intercepted podcast of March 22, 2017, where Greenwald and Jeremy Scahill expressed skepticism about Russia actually being behind the email hack of the Clinton campaign and the DNC. By this view, it seems she wanted to correct their mistakes by proving they were wrong.
Greenwald doesn't agree. Along with his signature gentlemanly politesse, he pointed to this statement, which argues that because Winner requested a transcript of a different March 29 episode in which he was absent, she definitely was not trying to correct him. 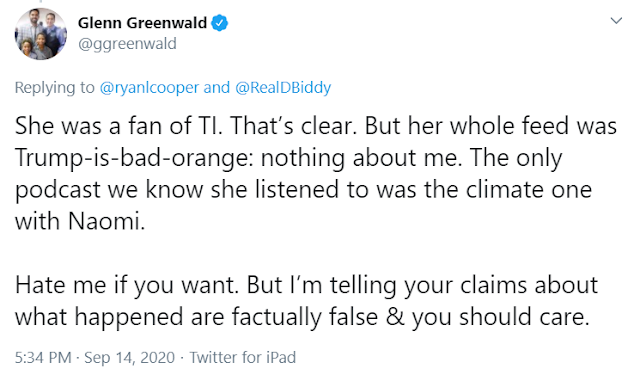 Silly Twitter beefs aside, I think it is worth clearly outlining the case for Winner's probable reasoning, as it demonstrates her honorable motives, and because Greenwald and others like Matt Taibbi continue to insist that I am either mistaken or lying about this. They are wrong.
I contacted Kerry Howley, the author of the New York story, and she says that it's not known with absolute certainty why she leaked the document — Winner's family is sure that her motives were selfless and idealistic, but they don't know what precisely prompted her to choose that particular document on that particular day. However, the circumstantial case for her wanting to correct Greenwald and Scahill being among the reasons is extremely strong. It goes like this:
It proves nothing that Winner requested a transcript for an episode other than the one where Greenwald was talking about Russian hacking, because — at the risk of elaborating the bleeding obvious — requesting a transcript of one episode of a podcast is not proof that someone has not listened to a different episode. She might have just wanted the March 29 one for unrelated reasons. Or she could have gotten the dates wrong, and later figured out that the transcripts were and are posted online (indeed, if they just emailed her a link to the posted transcript, as would seem logical to do, she would have realized it directly). By contrast, Greenwald's story purporting to demonstrate beyond question he was uninvolved doesn't pass the smell test. You'd have to believe that Winner was listening to an episode about climate change with Scahill and Naomi Klein, and then decided to leak some documents about Russian election interference that contradicted all the bullshit in the previous episode, to The Intercept and nobody else, purely by coincidence. Like, come on.
Now, there could be additional motivations, of course. There is a compelling public interest in revealing how a foreign power has attempted to compromise American election infrastructure, for instance. But it simply beggars belief to think that Winner wasn't also trying to correct Greenwald and Scahill on their mistaken beliefs. Alas for that wasted faith.
It's rather curious how Greenwald has been so extraordinarily hostile about this whole affair. Perhaps if I were one of the most famous journalists in the world because of how I handled some leaked documents, and I co-founded a publication literally named after snatching hidden communications, and someone took an incredible risk to correct me on a point of fact with classified information, and my publication basically handed them straight to the cops, I might be deeply humiliated. If I were a pathologically muleheaded person who was incapable of admitting even slight error, I might then react with furious outrage to anyone trying to point that out, and concoct tendentious lawyerly evasions trying to prove it was everyone's fault but mine.
Because while Winner was also sloppy with her opsec, and likely (though not certainly!) would have been caught anyway, she might not have felt the need to leak at all if Greenwald hadn't been so willfully dense about whether Russian intelligence was behind the hacking of Clinton's campaign and the DNC. Contrary to Greenwald's assertion in the March 2017 episode that "it’s very possible that the Russians were behind [the hacks], although we still haven’t seen any evidence for it," there was a veritable trainload of evidence by mid-2016.  The private security company CrowdStrike published a detailed explanation of the coding tracks left by the Russian intruders in June 2016, which was subsequently confirmed by Fidelis Cybersecurity and Mandiant that month. Professor Thomas Rid wrote an argument summarizing the evidence for Motherboard in July. The entire U.S. intelligence community said the same thing in October (as did the Mueller report and the SSCI investigation later).
Anyways, as Chris Hayes points out on his podcast with Howley, it's really a shame that there has not been much of an organized effort to spring Winner from jail. The fact that her leaking did not fit the narrative of a bitter goofball whose entire politics revolves around hating liberals doesn't change the fact that she did what she did in good faith, her action caused no harm to anyone, and five years and three months in prison is a preposterously cruel sentence. She should be pardoned and freed immediately.