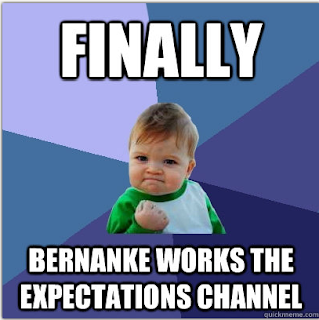 Matt Yglesias has a good summary of what's happening and what it means:


QE3 is here, and it's pretty big. They've announced a form of "open-ended" quantitative easing in which the central bank commits to "purchasing additional agency mortgage-backed securities at a pace of $40 billion per month."

But there's something much much much more important here than the numbers. It's the guidance. It's not the Evans Plan, and it's not nominal GDP level targeting, but it's good, and it's right here (emphasis added):

To support continued progress toward maximum employment and price stability, the Committee expects that a highly accommodative stance of monetary policy will remain appropriate for a considerable time after the economic recovery strengthens. In particular, the Committee also decided today to keep the target range for the federal funds rate at 0 to 1/4 percent and currently anticipates that exceptionally low levels for the federal funds rate are likely to be warranted at least through mid-2015.

(You know shit got real when Yglesias uses bold and italics.)

First let me say that I think this is great news, and I think it's likely to work, if slowly. And let me also say that calling this "quantitative easing" seems a bit strange. Previous rounds of this policy were called "quantitative" because they specified a particular dollar value of assets the fed was going to purchase. This is open-ended, meaning the Fed will allegedly just keep buying and buying until the labor market recovers, so there's no telling exactly how much that could be. And let me further say that this represents a big victory for the alliance of academics, econ bloggers (especially Scott Sumner), and associated journalists, who have been howling about this for years. Other fields should take note.

Tyler Cowen is on largely the same page: "I say the rate of price inflation is going up. I see this as a free lunch, and I am quite curious to find out just how big or small of a free lunch it is going to be."

I am also curious. I've been reading some stuff recently (here's a good example) questioning the mechanical efficacy of quantitative easing (QE) as it has been practiced. The issue is how QE happens—the Fed buys a bunch of financial assets, usually asset-backed securities or government debt, with newly created money. In the broadest sense, the idea is to inject money into the economy. The above paper makes the point that while years ago, the financial sector was built on a reserve of central bank deposits, these days a lot more is built on collateral—the same stuff that the Fed buys in QE operations. Some collateral is good, some bad, and since the Fed is cautious, they only want to buy the best stuff, and so QE could actually cause a liquidity shortage as they suck up all the best collateral.

On the other hand, if the important thing is the expectations channel, then this sort of effect shouldn't matter much. If everyone adjust their economic expectations up at the same time, then this could quickly become a self-fulfilling prophecy. We'll find out which soon enough, hopefully.