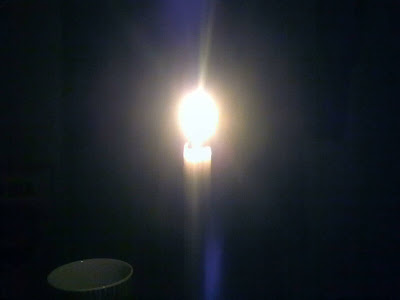 Sorry for the light posting folks, I've been real busy trying to prepare for a river trip coming up next week. But I had a quick thought when thinking about the recent ginormous power failures here compared to my two years in the Peace Corps. (James Fallows has some good thoughts here, here, and here.)

So, the background: we had a huge storm here, and the power was out at my house for almost five days. When I was in South Africa, this never happened. My village, about 100 km away from the nearest sizable town, way out on the rim of the Kalahari, would lose power pretty frequently during the summer from lightning storms, but it would almost always be back on within 12-24 hours. These lightning storms, by the way, were by far the most intense I have ever experienced. Bolts so close together that there was more light than darkness, and a continuous cannonade of thunder. Wind that tore off part of my roof. But the longest period of outage that we had during those two years was a little over two days, when a strike actually fried a conductor in my village and the power company had to send someone from ~250 km away to fix it.

This discrepancy—two-day power outage in a tiny village hundreds of miles out in the countryside of a poorish country, compared to a five-day outage in the capital city of the richest country the world has ever seen—is nominally about trees, I think. DC is very heavily treed, apparently with fall-prone species, and not that dense, making the power infrastructure more vulnerable and expensive per user. When a big storm comes through, some of those trees fall over and crush the power lines; around my village there were only much smaller shrubs and thorn trees that were a lot tougher in any case.

Really, though, it's about government. As it turns out South Africa had rolling blackouts back in 2008 (before I arrived) from a lot of Thabo Mbeki-related irresponsible lack of maintenance and capacity-building. But when that turned into a giant political and international embarrassment, they fixed the problem. In a kinda cheap, half-assed, and corrupt way, but it got the job done.

This is what I'm talking about when I say that South Africa has the US licked when it comes to dynamic governance. Mzanzi is an extremely corrupt country, but at least they try to do big things, or seem to feel a sense of collective guilt when they make horrible mistakes. America seems apathetic by comparison. We strut around, pounding our chests and grunting about how we're the greatest country in the world, but when the power is out for nearly a week in our capital city, we can't manage much more than a collective shrug.

For shame. Where is our pride?