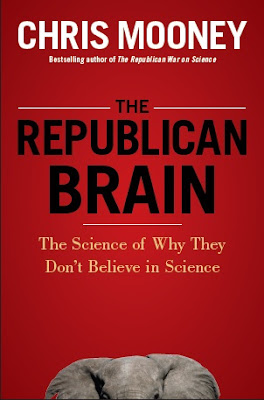 [For a primer, check out Kevin Drum's critique here and Mooney's response here.]

This is the latest from Chris Mooney, the man that brought us the book The Republican War on Science, which was quite good. This time he's trying to figure out why not just science denial but straight-up reality denial (e.g., birtherism) has taken such a firm hold on the right.

I don't think this one is quite as good as TRWOS, but it's an admirable effort. The plain fact is that denialism is not just common on the right but mandatory. Look at what happened to Jon Huntsman. Mitt Romney has given in to it on climate. These are facts that cry out for an explanation, and Mooney offers a pretty convincing one on the merits. The argument is all heavily hedged, which is entirely appropriate given the infant state of the field, but basically it says that because conservatives are more closed, fixed, and certain in their views, they are more prone to the universal human traits of motivated reasoning and close-mindedness.

It was fairly convincing fleshed out, but the argument could have been patched up by poaching from other subjects. Start with political science--Kevin brings up European conservatives as examples of conservatives who don't deny science. This is mostly true (though, as Matt Steinglass notes, there is plenty of denialism from the likes of neofascist Geert Wilders), but raises some interesting thoughts. It's obvious if you look at other countries that there's nothing inherent in reality that mandates a two-party system. Instead, as Julian Sanchez points out, our kind of political institutions tend strongly towards two parties only. This leads to an entirely different kind of motivated reasoning where voters can focus on whatever trait they strongly dislike in the opposing candidate or party, then hold their nose and vote for the other guy. (Witness Razib Kahn, an extremely intelligent scientist, doing a quintessential example of that here.)

[UPDATE: More sources from the Anglosphere. Reading Chris Hayes' new book, I find that a quarter of Britons are climate deniers, and a possibly greater number of Australians, probably fueled by Murdoch's The Australian and that Australia is mostly a two-party state as well.]

This could be an answer to Kevin's objection. Perhaps European conservatives do have an similarly strong baseline tendency toward denialism, but end up shunted into fringe parties, while at the same time, the lack of American-style binary, zero-sum logic deprives deniers of a lot of voters who would have supported them out of instinct or hatred of the liberal side.

I would have also liked a look at history. Mooney clarifies up front that political beliefs are highly contingent on the course of history. From reading Fairness and Freedom I know that New Zealand has had much less violent and extremist rhetoric in their political discourse compared to the United States. Is there a connection between that kind of extremism and denialism? The American South sure seems like a concentration of both.

Finally, I was fascinated by Mooney's conclusive lessons. In essence, he says that liberals need to take a page out of the conservative playbook and become more organized, righteous, and supportive of each other. I think one could read that as trying to shut down people like Glenn Greenwald (who is ferociously critical of President Obama), but I think charitably read he makes the case that whatever liberals decide we want, we need to learn how to play politics to get it, and it's a team sport fought for keeps. He seems to have given up his "framing" hypothesis from years back, and just gone with the rally-the-troops model. Ed Kilgore had some interesting thoughts on this a couple days ago.

Overall, a good read on a critically important topic.

[On a side note, a relative of mine wrote recently to theorize that Mooney and myself might be related. My grandmother's maiden name was Mooney, you see, and she and Chris both come from the Phoenix area. (Interestingly, on a side side note, she was the first woman on the Tempe city council! Go Grandma!) Not sure how I could verify that, though.]