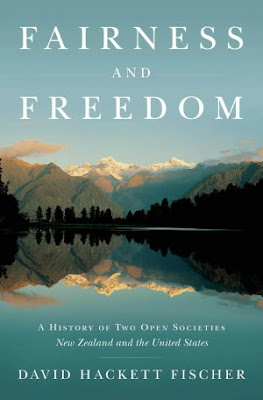 I read this one on the advice of Tyler Cowen, and quite liked it. As Cowen says, it's an excellent introduction to New Zealand history, and worth reading for that alone. Kiwi history is actually really interesting, and the parallels were quite surprising at times. Here are the main things that jumped out at me:

1) Ideas matter. The way in which colonists of each country treated their native populations is instructive. In America, the Indians were treated with unconscionable viciousness and cruelty, up to and including genocide. In New Zealand, while relations between colonists and the Maori were strained, and at times deeply unfair and bloody, they were far, far more decent than here. Fischer explains this, convincingly, as the progress of Enlightenment ideals. New Zealand was founded about 200 years after America, and it made a huge difference.

2) The book could have used some more quantitative economic explanation. The US has a much higher GDP per capita, but also vastly higher poverty. What kind of implications does this have? How much of that extra GDP is going to finance and the super-rich? Has the Kiwi focus on fairness dented their standard of living? Fischer doesn't explain enough.

3) The US is a barbaric place. As a liberal, it was hard not to think boy, this New Zealand sure sounds nice! The US makes out like a dumpster by comparison. Time and again Fischer would make some comparison, ostensibly talking about the pluses and minuses of each country, and time and again the Kiwis won hands down. The Trail of Tears, slavery, Jim Crow, an enormous prison system, and galloping inequality...

Anyway, I thought for most of the book that the frame just didn't work. Sure, Kiwis are obsessed with fairness, and it seems like a reasonable, self-consistent belief, but the American obsession with freedom and liberty is a lot less coherent, bordering on sloganeering. The people that talk the most about freedom, like the Tea Party brigades, have a notion of it that couldn't withstand a fifth-grade discussion. Throughout history it has often explicitly meant things like "freedom to steal the freedom of others." It reminded me of an old Yglesias post:


Freedom-talk is an important influence in American rhetoric, but it—and especially its self-consciously antiquarian cousin liberty-talk—has nothing to do with any analytically respectable conception of freedom. It has to do with safeguarding the perceived self-interest, lifestyle, and social status of the right sort of people. This is a country where the free market position is that for-profit colleges should have a right to unrestricted government subsidies.

But Fischer pulled it out at the end, with a brilliant concluding chapter. It does again make New Zealand look better by comparison, but it's a great discussion of freedom, fairness, the pitfalls of each, and their interlocking and mutually supporting natures. Great book, and worth a read.