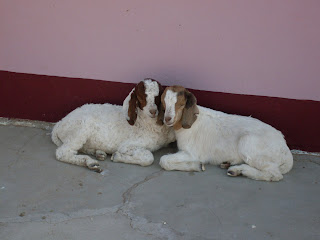 Goats are my favorite animals at my house, I think. Cows are too large and alien, chickens are too damn loud and shit everywhere, and the dogs bark and jump on me. The baby kids do make a noise (what do you call that?) during they day, an eerily human kind of wailing, but it's not nearly as loud as a rooster and they sleep at night. Still, more than once I've walked out my door to see who had left their baby in the road only to find a lonely kid broadcasting its location to goatdom.

The other day I was sitting outside and reading, and half-watching the animals swirl around me in the hopes that I would drop something savory. One of the smaller goats (a couple months old, I'd guess) was trying for a one of the low walls that lie around our compound, about waist-high. Goats are fairly nimble, but this one was just a bit too small to make the leap. Finally he backed away, got up a head of steam, and made a running leap. He made the wall, but carried a bit too much momentum and fell over the other side into a large water trough. I only looked up in time to see his hind legs disappear amid a half-human burbling scream. He thrashed around in there for a good minute, splashing around and making a terrific racket. I'm not sure if I've laughed that hard since I arrived in Africa.