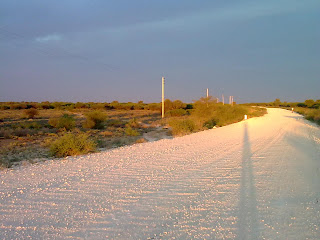 Today I learned that 90% of the eighth grade thinks that the sun goes around the earth, and I spent a good hour trying to convince them otherwise. They stared at me, sullenly uncomprehending, like I was speaking Greek, and impolitely to boot.

More and more I am realizing the preposterousness of the South African education system. Yesterday I went to the neighboring village to check out the high school and see how it goes. I watched Andy (another PCV) teach a couple classes (quite well, I might add). Then we went to check out the various classes, to see how many teachers there were in class. It was then that I got a first glimpse of the matric test, the test that the entire 12th grade must take.

It’s brutally, absurdly hard. Most of the math was stuff I hadn’t seen in years, tricky algebra and second-year calculus. There’s a fat dollop of organic chemistry that I didn’t see until sophomore year in college, and a lot of college physics as well. If I could describe it in American context, it’s like the AP calculus BC, chemistry, physics, biology, English, foreign language, and mechanical design tests combined. Only the 3-4 smartest people I knew in high school could have done well (in my opinion). I’d bet that not a single one of the teachers in my village could pass well enough to go to college. Of course, passing is only 33%, but to go to college one has to do better than that.

The whole system is set up to ensure cascade failure for the students. Starting in 9th grade they take tests in all 11subjects, and if they don’t pass the math they are forever shunted into “maths literacy,” which is like math for poets, with no way to make it back into the real class. It’s bad enough to have the matric as the be-all, end-all of the future of a student, but to have a test that I would regard as wildly inappropriate for an American landing on these poor rural students…it’s outrageous.

There are more little things. Like how the curriculum demands that every subject should receive a set amount of time, but the percentages are strange (one subject is 7%), so the schedule is different every day of the week. This isn’t followed, of course, but it seems out of the question to suggest that maybe we should say “screw the government, let’s make up our own timetable,” so it’s just improvised every day.

What a mess. But if my students someday realize that the Earth goes around the sun, I suppose I can consider this a success.