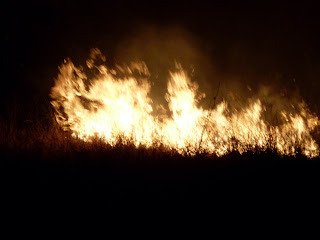 This is a picture from some time back in Marapyane, right behind my host family's house. We were out there with buckets for a couple hours defending the perimeter of the property with buckets and so forth, which was successful. It probably wasn't too necessary as it was one of those cool, fast grass fires that goes out easy when it runs out of fuel, and my family's lot was mostly sand. Still, it felt good to be out there manning the barricades as it were, and it helped me integrate into the family a lot. Brush fires are quite common back there, especially during the winter/early spring where there's lots of dead growth to burn, and probably part of the natural order as not two weeks later there was a couple inches of fresh growth over the black ash. I used to see little kids starting those things practically every day.

Perhaps it's too bad that the goats and sheep have gnarled down every bit of edible anything for a mile radius around my village--down to mineral soil, as my dad would say. The vegetation is a bit sparser here in any case.

Today I went for a long walk down the dry riverbed, and perhaps tomorrow or Monday I'll have some good pictures of that country. It's a bit deserty and certainly filled with some spiny plants (next trip to Kuruman I plan to buy some sturdy boots, or my tennis shoes will be toast in short order), but against all expectations I actually found a steep slope with some commanding views (for Northern Cape). Quite nice.