What Happens to the Electoral College under an Expanded House?

By Ryan Cooper June 10, 2017
Awhile ago I idly speculated that the size of the House of Representatives should be increased. From back in 1913 when the size of the House was fixed at its current 435 seats, the number of people represented by each member has increased from a bit over 210,000 to over 700,000 today. Insofar as each member is supposed to be in contact with his or her constituents, that's rather straining the point of the body.

So suppose we fixed the size of the House based on a desired district size of 150,000 people (incidentally over twice the size of the average constituency in the UK Parliament). The way House seats are currently apportioned is a real pain in the neck because first you have to dole out one seat to every state, and then the rest according to a complicated population-based formula — necessary because a few tiny states like Wyoming have less than 1/435th of the population.

But if we select 150,000 as the desired district size, we can simply divide each state's population by 150,000 and round to the nearest whole number. That way even Wyoming starts out with 4, and we don't have to worry about everybody getting at least one. So calculated, the New House would have a total size of 2055 members. No doubt states with unlucky fractions would complain about getting rounded down, but it's far more fair than the current system.

This would also affect the Electoral College, because electoral votes are allocated based on votes in Congress: states get one for each representative and one for each senator (and DC gets as many as the smallest state). And because it would reduce the over-representation of small states somewhat, it would make the Electoral College substantially more fair. Here's the 2014 voting-eligible population per electoral vote: 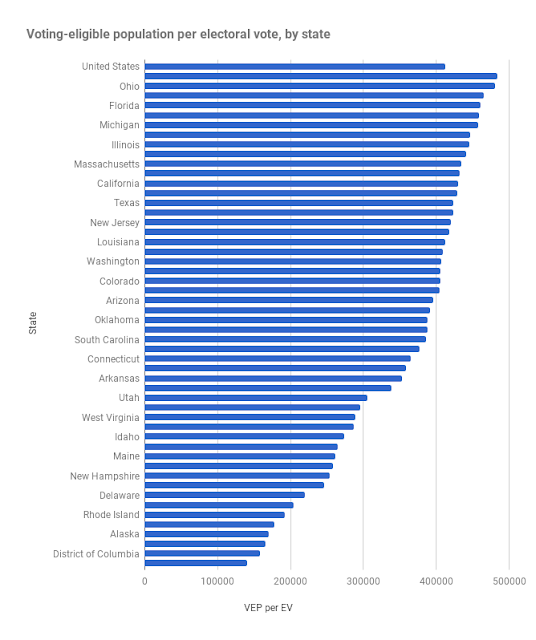 And here's the same population under the New Electoral College: 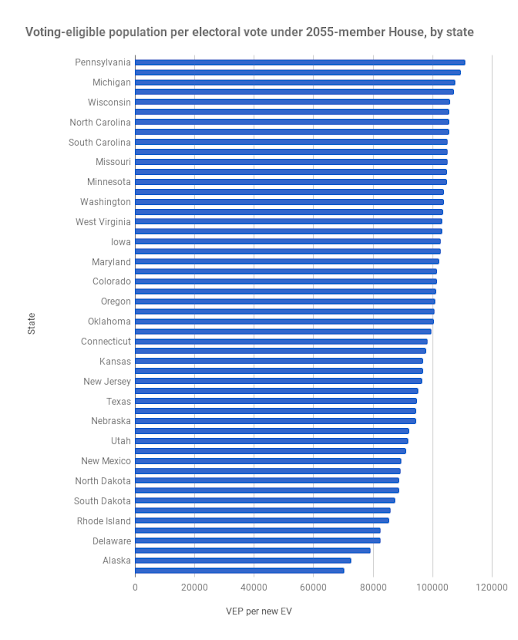 Note how the distance between the most over-represented and most under-represented states has been sharply compressed. Still a bit unfair, but vastly less so than the current system.

Now, the Electoral College is still a stupid system and should be replaced with a simple popular vote. And a first-past-the-post district system is far inferior to a proportional parliamentary system (or MMP system, etc). But this is a quick and easy way to at least wound two birds with one stone — requiring nothing more than an act of Congress.