By Ryan Cooper April 12, 2016
There's a new study out about income and life expectancy, and unsurprisingly it finds that rich people live much longer than poor ones — 15 years for men, 10 years for women. There's a smooth relationship between more money and more life, particularly at the very bottom of the income ladder, where there's a collapse of several years: 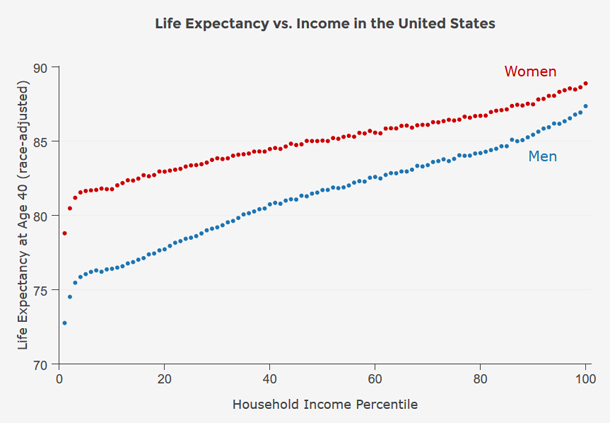 However, there are also apparently some geographic wrinkles here. Poor people do very badly in Nevada, West Texas, and Indiana, but much better on the west coast and Glenwood Springs. At the New York Times, Neil Irwin and Quoctrung Bui seize on locally-based policy as an interim step that would be much easier than fixing income inequality:


But the fact that some places have increased the life span of their poorest residents suggests that improving public health doesn’t require first fixing the broader, multidecade problem of income inequality. Small-scale, local policies to help the poor adopt and maintain healthier habits may succeed in extending their lives, regardless of what happens with trends in income inequality.

The sense of relief here is palpable. Thank Christ we don't have to change the distribution of income, because that is nigh-impossible.

But at least when it comes to policy design and implementation, the reverse is very obviously true. National-level programs to hand out checks to the poor — and thus level the distribution of income — are about the easiest policy it is possible to imagine. There is already a big check-writing bureaucracy, with detailed information about basically every person in the country. Adjust taxes a bit and send out more checks, the end.

Universal health insurance, or universal paid leave, or a child allowance would be somewhat more logistically challenging, but still easily within the remit of even the fairly incompetent American state.

By contrast, convincing thousands of local communities to drastically alter their local infrastructure and government programs would be a gargantuan political challenge. It means attention must be dispersed to thousands of simultaneous fights, tough in the best of circumstances — which this clearly is not, as most of the worst places are rural and conservative. Worst of all, local communities are generally far more resource-constrained than the national government. Poor people in Detroit do very poorly, for example. I'd say it's a safe bet this is because Detroit had most of its economic base torn out with a mellon baller a generation ago. Rest assured, Detroit knows all about this, and hasn't been able to do shit about it.

The only other obvious solution is that favored by conservatives: post-WWII-style population transfers from struggling to thriving communities. That would be hellishly expensive, probably not very popular, and has every chance of just creating a new struggling underclass in the previously-thriving location. San Francisco could not simply absorb all of Appalachia.

Anyway, that is not to say that improving local communities shouldn't be a high priority. It is, and should be. It's just vastly more difficult than using the tax system to shift money around, or creating universal social insurance.

I suspect Irwin is actually referring to wages when he says "income inequality," in keeping with the casual neoliberalism that dominates economics coverage in this country. This school of thought implicitly believes that wage labor is the only legitimate way of obtaining income (aside from capital rents, of course). Therefore whenever it might come up, welfare is either actively shunned, or more commonly excluded from the policy menu.

But the product of crummy social insurance and huge inequality is the exactly poor health and despair that is under discussion. So the "wonks" root around for any sort of wrinkle in the data that might suggest a course of action other than taxing the hell out of the rich and kicking the money down the income ladder. I dunno, tax credits for local wellness programs??

Don't be fooled. Simple transfers and universal social insurance are by far the most promising avenue for improving the lot of the American poor.