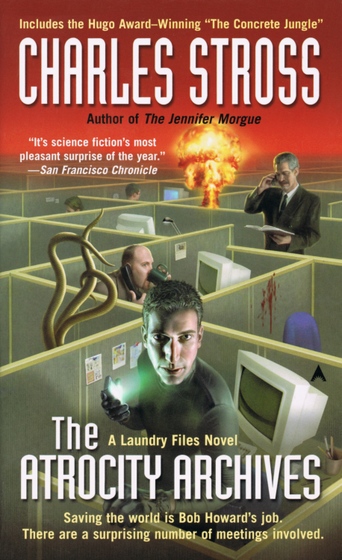 I just want to leave a brief note about a book series I just finished, Charlie Stross's "Laundry Files." As per my usual habit of late, I listened to them rather than reading. Good stuff! They're nerd thrillers with a Lovecraftian horror gloss, very funny, very entertaining, well-performed, and passably written. It was interesting, actually, to see how Stross's writing improved over the series; the first one was towards the beginning of his career while the latest was only released last year. (Though there were still a few too many "The penny drops" for my taste.)

It's a four-book series, so far—there's a kind of looming doom thing going over the later books that hasn't come close to happening by the end of the fourth book, The Apocalypse Codex. Word is that he's planning on a 9-book series with the Big Event (called Case Nightmare Green in the books) towards the late middle.

Anyway, nothing much to say about these in particular. If you like thrillers, or spy-fi, or horror, they're worth a shot. I found them quite useful as an exercise inducement—always nice to have something compelling to bribe yourself with to get one's pushups accomplished.