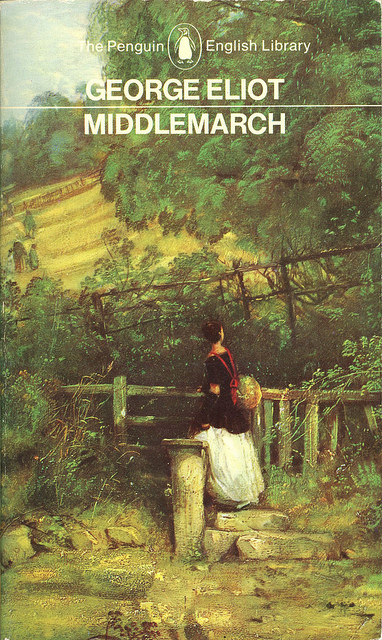 This was a couple weeks ago, so much that I'm already almost through my next audiobook (Anthony Beevor's Second World War), but I do want to note that Middlemarch was a doozy. So, so good. I'm certain that I can't have had any thoughts that haven't been already been had better and sharper, so I won't bother with more than a few disconnected points.

1) As I just said, it was stupendously good. The only thing I can think to compare it to is War and Peace. Slightly less epic scale, but balanced by more penetrating psychological insight, more fully realized characters, better plotting, and less goofy historical theorizing. This is a work of extreme skill and brilliance.

2) That said, there were slightly too many coincidences driving the plot for my taste. The very last one, where one character walks in on two others having a conversation and comes away with what seemed like an unjustified idea of what was happening, grated quite a bit. (I suspect this is just how tastes have evolved, and the reactions made a lot more sense in the 19th century.)

3) Oddly, I was often reminded of Stephen King. Now, I rather enjoy the guy, but I wouldn't put him in the same rank as Eliot and Tolstoy. It was more a matter of technique, how when some great swallow of plot was coming down, the action would slow to a crawl, and Eliot would use the tension of wanting to know what was going to happen to sneak in a truckload of psychological insight. King, by contrast, uses the slowness mainly just to heighten the suspense. If anyone but a master had tried Eliot's method, it would come off as pretentious and clunky.

4) Things sure have changed when it comes to gender relations. Half or more of the emotional problems faced by the characters in Middlemarch come from people tripping headlong into marriage without really knowing their future spouse at all. We surely have a long ways to go to reach gender equality, but this at least strikes me as an area where there has been genuine progress.

5) A couple of great quotes:


-And, of course men know best about everything, except what women know better.

-The difficult task of knowing another soul is not for young gentlemen whose consciousness is chiefly made up of their own wishes.

-For pain must enter into its glorified life of memory before it can turn into compassion.

-Blameless people are always the most exasperating.

-It is an uneasy lot at best, to be what we call highly taught and yet not to enjoy: to be present at this great spectacle of life and never to be liberated from a small hungry shivering self--never to be fully possessed by the glory we behold, never to have our consciousness rapturously transformed into the vividness of a thought, the ardor of a passion, the energy of an action, but always to be scholarly and uninspired, ambitious and timid, scrupulous and dim-sighted.

Anyway, whatever, it's a classic and I have nothing really to add. You should read it.