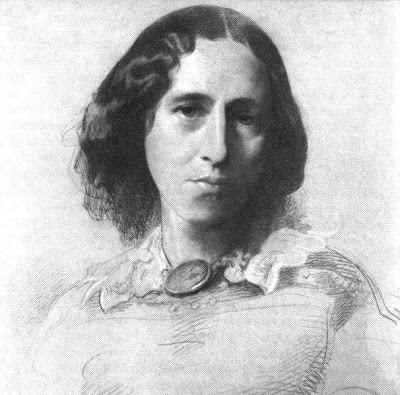 The other day I learned quite to my shame that "George Eliot" was the pen name of a woman named Mary Anne Evans. I had been resolving for quite some time to get back into the audiobook routine for walking to work, and on brief research her books seemed well-suited to being read aloud, so I picked up a copy of Middlemarch.

I'm not too far in, but so far (while it is rather plodding at times) it's about the most penetrating and insightful book from a psychological standpoint that I've read in years. It's like what Freedom could have been if it had the full human experience, and not just the shitty, awkward parts.

Eliot's work seem to be of that type which a patriarchal society deems (still does, to some extent) "women's issues," things like love, romance, family, emotions, etc. It sounds dumb stated outright, but those stereotypes still hold true today, to some extent, and I think they do serious damage to males in our society. Because that women stuff is of critical importance to the day to day existence of practically every man alive. As I was joking on Twitter, Cormac McCarthy is useless when your girlfriend has dumped you. He'd just tell you to buy a new pair of boots and ride a stallion to Mexico.

As Ta-Nehisi Coates wrote once:


Put bluntly, if you call yourself a reading man, but don't read books by women, you are actually neither. Such a person implicitly dismisses whole swaths of literature, and then flees the challenge of seeing himself through other eyes.

This is not a favor to feminists. This is not about how to pick up chicks. This is about hunger, greed and acquisition. Do not read books by women to murder your inner sexist pig. Do it because Edith Wharton can fucking write. It's that simple.

Further updates as I get deeper in.