Ship Design in Mass Effect, or, How a Staircase Destroyed the Normandy

By Ryan Cooper January 07, 2013
[Minor spoilers.] In my continuing quest to play through years-old games so they'll run well on my crappy computer, I took a spin through Mass Effect over the weekend (it was pretty good!), and one thing stuck out at me that speaks a bit to how set design affects the believability of a setting.

So you play as one Commander Shepard, a standard videogame badass, who zips around the galaxy in his own custom ship, the Normandy. You spend a great deal of time on the ship, and throughout the game something was nagging me that I could't quite put my finger on. Here's a map of the command deck: 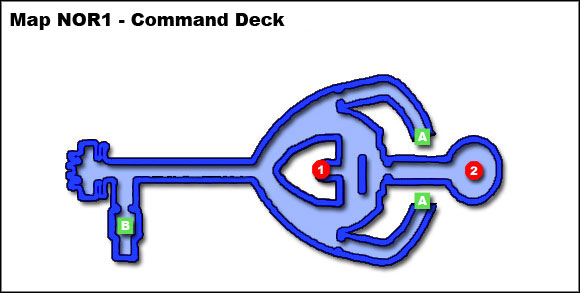 Mass Effect, like its close predecessor Knights of the Old Republic, has that Bioware interior design aesthetic where almost everything is perfectly clean and shiny, and 70-90 percent of all buildings are taken up by ostensibly ancillary spaces—catwalks, hallways, waiting areas, parlors, planters, staircases, etc. It's like they hired some architect to design "a building" only telling her after the fact that, oh yeah, people are supposed to live here. It's a minor thing for most of the game, but in the ship it really reaches the pinnacle of absurdity.

You see, someone spent a great deal of time researching actual science for this game, and not only so they could make sciencey-sounding explanations for the traveling faster than light. There's a "codex" on the menu screen with a whopping great backstory of aliens, human history, and so forth. There's a galaxy map, with dozens of accessible planets, most of which bear evidence of conversations with an astrogeologist.

But you see the two curvy bits of Normandy above, labeled "A?" Those are massive, sweeping staircases, probably five feet wide and 75 feet long, the kind of thing you'd see in a antebellum colonial mansion. Consider this picture of a submarine passageway: 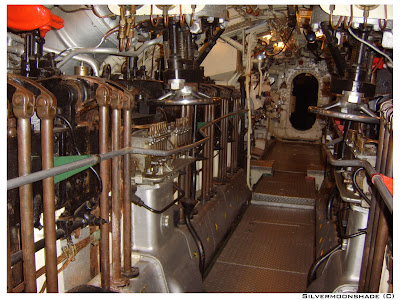 Submarines are the closest thing we have to military spaceships these days—they travel in extreme environments, where a major hull breach means pretty much instant death, and they often require big, expensive propulsion systems. That means that a major design feature is going to be extreme economy of space, because every extra cubic centimeter of space is going to mean a bigger, more expensive ship that will be harder to move. Look at the catwalk above—not only is it just barely big enough to fit a man walking bent over, it's got controls sticking out everywhere. A real spaceship would have ladders to move vertically, especially a military one, because then you don't have to accommodate disabled or obese civilians.

So having any staircase (let alone a giant matched set) on such a vessel is so ridiculously extravagant it's like having toilet paper made of woven platinum threads. All Bioware's name checking stuff like cryovolcanoes was badly hampered by walking into a ship that was obviously designed to look cool without the slightest thought to how such a thing would actually work. 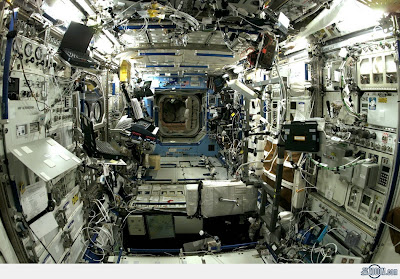 I suppose one could argue that the Alliance (the human military organization in the game) is so rich it can afford preposterous volumetric luxury, but at one point during the game an Alliance admiral comes to hassle you about how expensive the ship was. Even if they did have money spurting out of their ears, why wouldn't they scrap the staircase in favor of more propulsion, or shielding, or weaponry? Maybe this is why the Normandy got all shot to pieces at the beginning of Mass Effect 2.

Sadly, few others seem to be bothered by this. The Normandy in Mass Effect 2 has a more sensible elevator, but at the cost of some loading screens in between. Apparently people prefer the staircase.