An Unconvincing Case for the DC Height Limit 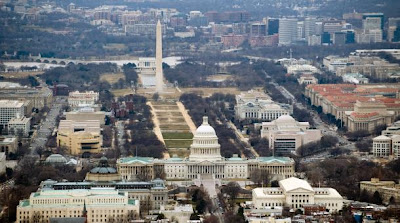 Over at the Atlantic Cities, Kaid Benfield has an "urbanist" case for the DC height limit, which might really be an elaborate plot to get Ryan Avent and Matt Yglesias prescriptions for blood pressure medication. But let's assume not.

First, let me clear away one small annoyance before getting to the meat of the case: Banfield's repeated implication (which is common in this type of argument) that everyone who disagrees with him is a whinging carpetbagger who hasn't earned the right to opine on his favorite city:


That said, I can’t sit on this any longer: the law that restricts the height of buildings in D.C. is under attack from all sorts of sources (many of them out-of-towners or relative newcomers to the city, probably not a coincidence).

Now, maybe I'm just a whinging carpetbagger who hasn't earned the right to opine on such things, but this is bogus (I do live in DC, for the record). We don't say that political reporters have to live in Ohio for ten years to opine on its swing state-iness, we don't say health policy reporters have to be licensed doctors. Really, you don't have to live in any city at all to write about its policies. It might help, sure, but like any policy matter, the meat of the understanding lies in study of the issue. Buses work pretty much the same everywhere.

With that out of the way, let's take on the meat of the argument. The height limit stops DC from growing, argue the repeal-ists, but Banfield disagrees:


Actually, DC can grow under current law. In 1950, with the height restrictions fully in effect, the city’s population was 802,178. In 2011, its estimated population was 617,996. The truth is that we were a "shrinking city" until about a decade ago, and we are nowhere near full capacity today.

This leaves out a lot of history. DC's absolute peak of population was in large part due to huge temporary wartime buildings which have since been demolished.

But consider: DC's residential vacancy rate is extremely low, and its office vacancy rate is the lowest in the nation. Of the existing structures in the District, we quite clearly are at full capacity right now, and one reason we can't get back to 1950 levels of density is the Height Act preventing additional construction. There are a lot of other reasons, most prominently grim NIMBY politics, but that is surely part of the explanation. I suppose it's not surprising that Banfield wouldn't credit this point, since he apparently doesn't believe in economics:


Building height has little to do with affordability. The argument that a limit on building height restricts housing supply and thus leads to higher prices is essentially the same argument made against Portland’s urban growth boundary. In both cases, it’s hogwash: if affordability were closely related to building height and density, New York City and San Francisco would be the two most affordable big cities in America.

This is wrong in about every way imaginable. What crude economics would suggest is that when you restrict the supply of something, you increase its price relative to what it would be otherwise. No one is saying that if you remove the restrictions the price will magically collapse. San Francisco is a paradigmatic example of this; apparently unbeknownst to Banfield, it has whopping great restrictions on its housing supply! Clearly DC, like other walkable cities with good public transport, will always be expensive—the high rents are evidence that it's a desirable place to live. But to argue that supply restrictions have no effect on price is just loony—why does he think that places like Phoenix are so cheap if it isn't high supply?

Banfield does make some decent points. I appreciate that he is in favor of density, and makes a good point that cities can get quite dense without tall buildings (while failing to note that Paris is five times denser than DC).

But his confusion is indicative of a common failure to consider economic evidence in favor of misty sentimentality. I've got nothing against sentimentality per se, it's just that in these sorts of arguments the hard economics doesn't even get a hearing. Consider that way back in 1998, a couple economists calculated that 22 percent of DC's real estate price was due to regulatory restriction. Matt Yglesias, looking only at downtown DC, reframes that probably-underestimated calculation:


In other words, you could allow for skyscrapers in the central business district, impose a staggering 22 percent tax on office rents, eliminate the D.C. sales tax, and still come out with cheaper after-tax office rents and more tax revenue than we have today.

The Monthly offices are based in DC, and that extra rent is money that could be going to me and the other staff, money which I at least would mostly spend in DC on goods and services, increasing local employment and helping the overall economy. Multiplied across the city, that would be a substantial economic windfall for everyone involved. Don't those sorts of considerations deserve equal weight with aesthetic considerations?