Iran Should Get a Nuclear Deterrent as Fast as Possible 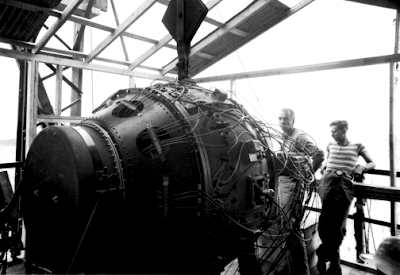 Glenn Greenwald says today what should be obvious by now:


That Iran will use its nuclear weapons against the US and Israel is rather obviously the centerpiece of the fear-mongering campaign against Tehran, to build popular support for threats to launch an aggressive attack in order to prevent them from acquiring that weapon. So what, then, is the real reason that so many people in both the US and Israeli governments are so desperate to stop Iranian proliferation?

Every now and then, they reveal the real reason: Iranian nuclear weapons would prevent the US from attacking Iran at will, and that is what is intolerable.

It has become clear in the last decade that the United States is a deranged beast when it comes to the Middle East. We have done almost nothing good there, and killed hundreds of thousands of people, including many thousands of our own troops, in the service of making things worse there and here in practically every conceivable way. I still believe that on balance we are among the least-worst global empires, compared to history—we haven't deliberately starved tens of millions, at least—and we don't act this way in Africa, or Asia (anymore), but when it comes to the Middle East, the United States is not just an aggressive, imperial warmonger, we're catastrophically stupid.

The Iraq War was in my view the most purely idiotic policy in US history. Others, like Vietnam, were plenty dumb, and probably worse for the country, but they are all at least somewhat more understandable. In 1963 Hitler's sweep across Europe was still fresh in the mind, and the Soviet Union's image was of the massed tanks of the Red Army, which defeated Nazi Germany almost single-handed, not the crumbling basketcase we think of today. The Iraq War, on the other hand, is something you cook up after a week-long ether binge.

Greenwald quotes Thomas Donnelly, a Project for the New American Century scholar (a member of the ether trust):


To be sure, the prospect of a nuclear Iran is a nightmare. But it is less a nightmare because of the high likelihood that Tehran would employ its weapons or pass them on to terrorist groups – although that is not beyond the realm of possibility – and more because of the constraining effect it threatens to impose upon US strategy for the greater Middle East. The danger is that Iran will 'extend' its deterrence, either directly or de facto, to a variety of states and other actors throughout the region. This would be an ironic echo of the extended deterrence thought to apply to US allies during the cold war.


Several of these [small enemy nations] are intensely hostile to the United States and are arming to deter us from bringing our conventional or nuclear power to bear in a regional crisis.

The reality today is we are the regional crisis. In total lockstep agreement with an out-of-control Israeli regime bent on war, the US presence in the Middle East is the most destabilizing and chaotic element in the region. Iran would do well to seek the only deterrent capable of avoiding war: nukes. Indeed, this is probably in America's own interest as well, properly conceived. We can't afford another pointless sucking chest wound in the national treasury and military. It would be a stabilizing influence.

And the idea that Iran would launch a unilateral national suicide mission is laughable. It just isn't credible. Even Ahmadinejad understands the logic.

Please Iran, save us and you from ourselves.

Also, for a much more level-headed version of this argument, see this in Foreign Affairs.