George Bush Does Not Have a "Towering Legacy" 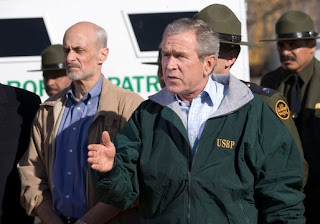 Jason Kuznicki has an annoying gloss on what is a mostly correct piece, "The Towering Legacy of George W. Bush." Here's the nut graf:


Conventional wisdom errs when it says that George W. Bush was incompetent. He was a president of overwhelming influence, the most effective chief executive since FDR. We live in the world that W. created, for good or — mostly — for ill...

It goes on about how one would expect. Yes, Obama has largely embraced the tyrannical Bush "security" regime. Unprecedented secrecy, unprecedented war on whistleblowers, illegal assassinations of American citizens with no due process, yes. All that is an extension of Bush's groundwork. But here's the thing—enormous power grabs do not make one competent. Bush failed to prevent 9/11, he ginned up a war on false pretenses for no reason, then got bogged down there and horribly bungled the occupation, then flailed ineffectively as New Orleans drowned. His Social Security scheme failed. His big-tent efforts to get Latinos in the GOP failed. Etc.

In short, Bush made a shambles of the government and his party. The fact that Obama is rolling in the same shit doesn't exactly exonerate Bush as much as condemn the entire political structure. We're in a decadent phase, maybe a terminal one.

And let's dispense with this as well:

But the deficits are also driven by something a bit more insidious — when the supposed party of deficit hawks goes on a spending binge, we can all guess what the other party will do. And of course they did. One never pivots away from free candy.

What is that missing? Oh yes, the Bush economic collapse! Yet more incompetence. And please, expecting massive fiscal retrenchment during a huge recession is a recipe for a Great Depression.