By Ryan Cooper July 27, 2012
The first thing you need to know about my kind of river trip is that it's not "whitewater rafting." That boat you see on the trailer is my folks' dory, and it's rigid, made out of wood (though you can also make them out of aluminum, foam, or plastic). Those kinds of boats are more fun, more difficult to row, and especially if they're wood, extremely vulnerable to rocks. If a kayak is like a whitewater motorcycle, and a raft is your sensible Toyota Corolla, a dory would be a BMW. A bit pricey and silly, but well-built and a joy to operate.

We also took a raft, which I rowed. Rafts (that is, inflatable boats) are easier to row, a bit cheaper, can bounce over rocks where a dory would get smashed, and can roll up into a smallish size. However, they're also sluggish, often leak, and with new techniques, are approaching parity with the cost of a dory. On the trip one of our friends had built himself a wooden dory from scratch in 2.5 weeks. He said the materials cost about $1500.

Anyways, these trips are with a bunch of old-time dory river guides who all worked in for a company called Grand Canyon Dories together back in the 70s and 80s. This company was owned by Martin Litton, the famous conservationist, and one of two key men who saved Grand Canyon from dams. Working for him is where my parents met. The old-timers have been doing reunion trips, with their families, for years—this one was the twentieth anniversary.

The dory is called the Celilo Falls. Like all of Litton's boats, it's named after some natural feature destroyed by man. Celilo Falls was a famous waterfall on the Columbia, and a longtime fishing spot for the local Native Americans, that was drowned by the Dalles Dam.

It was a great trip. We started at Corn Creek, and left the river just above Riggins. The rapids were fun, the water was nice and cool, and the heat wasn't too bad (the western dryness helped with that, though it did make my fingers crack). This was my first time at the oars in more than three years, and I felt pretty good about how things went. No capsizes, no major mistakes, no holes in boats.


The Salmon is one of the last rivers in the United States that isn't dammed somewhere, and so it has good swimming, big beaches for camping, and a relatively undisturbed ecosystem. The Colorado through Grand Canyon, on the other hand, is freezing cold from coming out of Lake Powell upstream, and that plus the lack of sediment in the water (as it is mostly captured by the dam upstream) has largely done for the native riparian habitat, as well as what used to be enormous beaches.

When you're on a boat, storage opportunities are considerably greater than, say, a backpacking trip. We ate good meals, and had cold beer all the way down. I read something like fourteen books (though many of those were on the car ride up, and consisted of pounding one short Terry Pratchett after another).

All in all, a great experience, and one I would recommend to anyone. 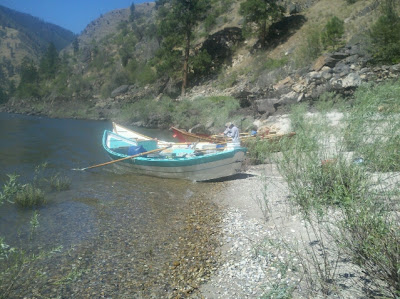