Why I Hope iPads Are Not The Future of Computing

By Ryan Cooper June 24, 2012
Farhad Majoo, in a couple Slate pieces on the new Apple laptop and the new Windows 8 tablet, has an bizarre conceit running through both of them: that tablet computers are going to kill the PC:


At the same time that it is killing the PC, Apple keeps extending the life of the personal computer with notebooks like the Air. That the same company is doing both these things is quite strange and spectacular—imagine if, in addition to building the Model-T, Henry Ford was also working on a way to breed faster, less smelly horses.

Is the iPad really killing the PC? Personally, every single person I know that has an iPad also has at least one PC, and it's not really a replacement. Rather, it's for gadget nuts or for people who like consuming media on a handy and portable device. But when it comes to doing something serious on the iPad, it sucks. Manage a spreadsheet, or type a long document? Even just upload a single file without going through iTunes? (You can do that with Linux, by the way.) I think Kevin Drum has this right:


Here's the thing: I have an iPad. I like it! Millions of other people like it. But let's be honest: it's a toy. It doesn't have a file system you can use. It doesn't run real apps. It can't exchange data with your Mac easily. It has a bunch of limitations on what you're allowed to do with it. (You can't upload files via a website, for example.) Put all this stuff together, and for most of us the iPad simply can't replace our main computer. In fact, it doesn't even play very well with our main computer. 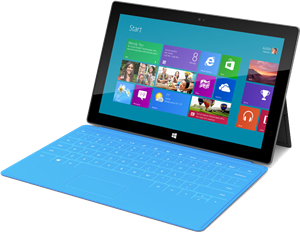 So the new Surface is going to be a tablet with a nifty detachable keyboard. Or: a laptop with a touchscreen. More convenient, slicker, easier to use for Grandma, sure, and if you stretch there could be a "new paradigm" in there. But not a gigantic conceptual upgrade from mouse + keyboard + screen. I'd wager that for real work, we'll still have mice in five years, because despite all the elegant touchscreen widgets I haven't seen one that even comes close to the pinpoint accuracy you can get with a mouse for fine work. Even just getting the cursor between two letters of a word is a pain. Even if I'm wrong about that, as Kevin says, the encouraging thing about the Surface is that it might actually work.

See, the real reason I hope iPad-style computing is not the wave of the future is Apple's approach to the user. Here's Manjoo on the new Surface:


For the first time in its history, Microsoft is taking PC hardware as seriously as it does software. The software giant is coming around to a maxim that archrival Steve Jobs always held dear—that the best technologies come about from the tight integration of code and manufacturing, and that no company can afford to focus on just one half of that equation.

Apple is a Stalinist dictatorship of a company, and they treat their users accordingly. Everything on the iPad must be directed through Apple-approved channels, and only Apple-approved applications will run on the thing (unless you've got a Linux box, or are willing to jailbreak it). Apple makes pretty good software, so their devices work well if you're willing to play only in their walled garden, but let's be clear about what this "tight integration of code and manufacturing" is. It means deliberately crippling the functionality of the device so that the user is forced to spend more time and money in the Apple ecosystem. The only difference between the iPad's command-and-control system and the crapware that lards up most new PCs (and Samsung Android tablets) is in functionality. The intent is the same, and it has nothing to do with making the "best technologies."

Computing may be heading for the iPad dystopia outlined by Cory Doctorow:

We're not making a computer that runs only the “appliance" app; we're taking a computer that can run every program, then using a combination of rootkits, spyware, and code-signing to prevent the user from knowing which processes are running, from installing her own software, and from terminating processes that she doesn't want. In other words, an appliance is not a stripped-down computer—it is a fully functional computer with spyware on it out of the box.

But I sure hope not.