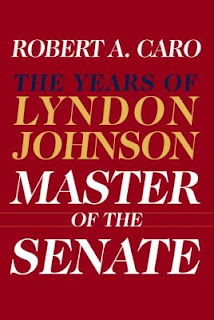 Thinking back on what is probably Caro's best book so far about Johnson, Master of the Senate, I'm struck again and again at how strange the institution of the Senate looked compared to today. Everyone knows that the parties back then had little in the way of coherent political ideology; both had liberal and conservative wings and bills were routinely passed on a bipartisan basis. Probably the most striking example of this was during the Eisenhower administration, where the Democrats were if anything more supportive of the president (particularly when it came to foreign policy) than the Republicans, who had significant isolationist and crazed anti-communist wings.

Before Johnson, Senate was a muddled tangle. Its committees were mostly controlled with an iron grip by Southerners (who abused the filibuster to stymie civil rights), its rules were a massive, illogical snarl of anachronisms, and its system of advancement was based on seniority, making many of its most powerful members feeble or senile. But the this very muddled, confusing nature, where individual senators held tremendous power and party discipline was not strong, meant that Lyndon Johnson's unsurpassed skill at personal manipulation and intrigue was extraordinarily effective.

LBJ got his power, and made the Senate work, mostly through personal relationships. He got the powerful old Senate bulls in the South to love him by limitless ass-kissing, and used that power base to get himself elected Minority Leader. He changed that position by upending the seniority rules slightly to give himself more power, then leveraged that power over committee seats as a threat to get even more power. Once firmly ensconced as Majority Leader, he used sheer force of personality, "supplication, accusation, cajolery, exuberance, scorn, tears, complaint and the hint of threat," to get the votes he needed, and procedural trickery to speed up or slow down Senate procedure as desired.

But with the kind of evolution we've witnessed in the past half-century, LBJ would be not nearly so successful in today's Senate. Sure, that kind of persuasive doggedness would be useful to use against the vacuous Democratic "centrist" caucus, but with lockstep partisanship and party discipline becoming ever-stronger, even Johnson wouldn't be able to round up Republican votes. The kind of cooperation with the President that he oversaw is simply unthinkable for the minority party these days.

The lesson here, I think, is that the Senate is a lousy institution. It's foolishly designed, its rules are idiotic, and for most of its history it has been a clot in the arteries of the republic. As it was before Johnson, the Senate again is a muddled tangle, where freedom goes to die. If we get the chance, it should be scrapped.