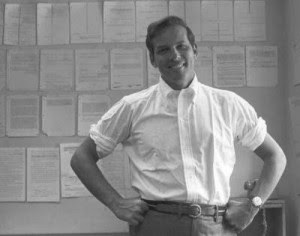 Alec MacGillis is not a fan of Caro's attachment to the "great man" theory of history:


But it’s also been clear to me for some time now that Caro’s exhaustive, colorful depiction of Johnson’s rise to power in Washington has not exactly been helpful when it comes to our country’s weakness for the Great Man Theory of politics and history. How many times in the past few years did you hear pundits and liberals lamenting that Barack Obama was unable to get more of his agenda passed because he lacked the strong-arm, big-cojones gumption of ole LBJ? Never mind that the Congress of LBJ’s day was vastly less polarized by party (Southern Democrats had not yet flipped to Republican) or that the filibuster was reserved for only certain matters (say, blocking civil rights legislation) rather than as a matter of routine. No, all this country needs is a true ball-busting leader to save the day.

Reading Caro's books and listening to him talk, it's definitely the case that he believes strongly in the ability of single persons to radically change a country, or even the world. I'd say that he probably underrates the importance of institutions, as opposed to personalities. I think that his study of power is somewhat peculiar to the United States, in that our institutions of governance are so cumbersome and unwieldy that it often takes a certain kind of ruthless manipulator to accomplish anything significant.

But I think MacGillis is underestimating the quality of Caro's work. His books are so brilliant and thorough that all kinds of truths about institutions are in them as well. As he is always saying, this isn't just about Johnson, it's about the times in which he lived. I think (I can't find any interviews on this subject) that if you pressed Caro he'd freely admit that the circumstances and institutions matter nearly as much as who is actually holding power.

But I also think that individuals actually matter too. Obama really could have used some of LBJ's ball-busting manipulation. Johnson wouldn't have been stymied by the filibuster--he would have forced a quick rules change that eliminated it, and then rammed through his legislation on a party line vote. Furthermore, he would have fully flexed the muscle of the federal bureaucracy, not let important posts go unfilled for years on end. Obama has been bizarrely uninterested in things like Federal Reserve Board seats, which are critically important to his re-election. Great accomplishment requires leaders who are comfortable with (and, probably, desperately crave) wielding great power.