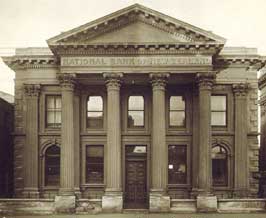 Matt Yglesias had some recent skepticism about the idea of breaking up too-big-to-fail banks:

This all just backs in to the point that even though the phrase "too big to fail" has caught the public imagination, it's never been clear that size is relevant. The point of bailouts is generally to prevent panics where insolvency at one institution leads to a liquidity crisis at many institutions. If you have a larger number of smaller institutions, it's perhaps true that any given failure is less likely to spark panic but you're also more likely to have failure.

Contrary to myth, there's no such thing as a "small enough to fail" depository institutions in the United States nor are small banks immune to terrible decisions and bankrupting themselves. But what happens is that in the FDIC resolution process the depositors get the overwhelming majority of their money back, the stockholders get nothing, and the managers get fired. It's not a costless outcome and it doesn't replace the need for prudential regulation, but the basic functioning of the system doesn't rely on the prudential regulation being perfect it relies on the FDIC resolution process halting panics without propping up shareholders and managers.

The argument for getting rid of TBTF megabanks to me seems essentially political. Look at what happens when JP Morgan takes a large hit, but a relatively minor one compared to the size of their balance sheet. They get wall-to-wall coverage in the media. If they were in real trouble the incumbent management would, as they did in 2008, bring stupendous pressure to bear on the government. CNBC would lead the rest of the lickspittle financial press running nonstop breathless hysteria speculating if Obama would "let the economy fail?"  Probably JP Morgan would get themselves another no-strings-attached bailout.

Contrast that with the failure of small banks, which died by the hundreds during the crisis. Atrios did a continuing series on that, and hardly anyone noticed aside from him.

Yglesias is right both that small banks can be every bit as systematically risky as large ones (it sometimes only takes a small stone to start a landslide) and that it's possible to imagine a process where a megabank goes tits-up and the government smoothly steps in to secure the system while wiping out shareholders and management. But the politics are impossible. I mean, look at the sweetheart deal the big banks got for committing systematic mortgage fraud. Someone at MF Global stole something like $1.6 billion and no one got in trouble. If the government can't thread that needle without giving the banks more than token punishment, then there is zero chance that they're going to be able to orchestrate a restructuring of the country's largest bank which wipes out management and shareholders.

The good thing about the Depression was that the power of the banks was broken. Like back during the Gilded Age, a lot of the very wealthy lost their fortunes, and the obvious failure of Hoover utterly discredited his conservatism. This cleared the path for FDR and the New Deal, which was loathed by the corporate and media elites back then for basically the same reasons similar policies are loathed now.

We seem to be stuck in a political bog where increasingly extractive corporate elites have failed the country and their own businesses, but through the action of the taxpayer bailout, managed to prop the system up enough to avoid total collapse. They thereby preserved their own power and avoided creating rampant despair, which would lead to political revolution, but at the cost of preserving a rotten system.

We've already had one bankruptcy and one massive loss gambling down at the dog track. Soon enough we'll have another full-blown crisis. Here's hoping the next President has the good sense to break the banks when she's got the chance.

UPDATE: Someone on Twitter raised the counter-example of MF Global as a firm that was allowed to fail. True, but it had assets of around $41 billion. JP Morgan has assets of $2.26 trillion.