*Why Nations Fail* and *Twilight of the Elites* 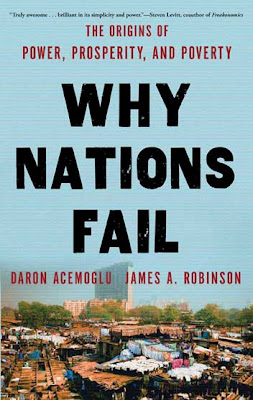 The central problem of society is the problem of power. Any society much beyond subsistence level is too complex to governed without delegation. A leadership of some sort must be given power so that the basic functionality of government can be provided--security, transportation, etc. People ain't got time for that stuff. This means an elite must be developed, a class of people with extra power. The trouble is that power is dangerous. People tend to use it for their own benefit, especially if no one is stopping them. This is the thesis of Why Nations Fail: countries which cannot restrain their elites are robbed blind by them and remain poor. Their institutions are extractive. Successful countries, on the other hand, dole out power while restraining corruption and self-dealing. This well-delegated power allows the construction of complex public services: trains, highways, intercontinental ballistic missiles, spaceships, etc. Their institutions are inclusive.

WNF gives a fairly straightforward public choice theory argument for how elites tend to behave in failed states. Public choice theory, briefly, is just applying economists' "rational agents" method to the political system, meaning a scheme where politicians and bureaucrats tend to act mostly in their own cynical self-interest. It has been developed by libertarian types who are skeptical of government, and often used to attack it. Public choice theory is not a great economic doctrine (though it is surely useful at times), rather it should be taken as a terrifying lesson as what what awaits those countries that can't keep their elites pinned down. WNF provides a vision of what countries look like when public choice theory really obtains, and it's horrifying. Economists' rational agents in positions of power are tyrants. Matt Yglesias, interestingly, previewed this argument months ago:


If you look at a really poorly governed place (Congo, say) the problem isn’t that the people in charge of regulating air pollution aren’t doing their jobs correctly. The problem is either that the men with the guns and dungeons are corrupt, or else that they’re incapable of protecting citizens from other predatory gangs of men with guns, or some combination of the two. When I was in Russia, I was robbed by policemen on several occasions under the pretense of fining me for having my visa out of order, and upon leaving the airport security guards stole all my cash. In the United States, neither of those things has ever happened to me. The existence of the rule of law and secure property rights is, where it exists, a triumph of public integrity against the assumption of cynicism.

Societies which can beat back public choice theory are the successful ones, usually through some combination of wise structuring, oversight, and development of moral norms. And lest you think the latter is not that important, I present the following, from an otherwise forgettable piece by Michael Lewis on Germany:


Jörg Asmussen...is a type familiar in Germany but absolutely freakish in Greece—or for that matter the United States: a keenly intelligent, highly ambitious civil servant who has no other desire but to serve his country. His sparkling curriculum vitae is missing a line that would be found on the résumés of men in his position most anywhere else in the world—the line where he leaves government service for Goldman Sachs to cash out. When I asked another prominent German civil servant why he hadn’t taken time out of public service to make his fortune working for some bank, the way every American civil servant who is anywhere near finance seems to want to do, his expression changed to alarm. “But I could never do this,” he said. “It would be illoyal!” 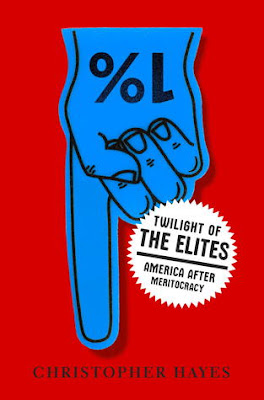 This moral angle is one of the big weaknesses of WNF--the short shrift it gives to norms and ideology. The obvious truth is that most leaders in the developed world are not sociopaths or tyrants (not yet, anyway), and the explanation they give for that fact—a story of countries randomly developing a balance of power that prevents total tyranny—is not very convincing. Successful nations have a balanced group of elites, where none can permanently crush the others, plus enlightenment ideas which the elites really believe, plus institutional norms that restrain self dealing because "it isn't done," plus a semblance of oversight, like a media which can appeal to those norms and shame the corrupt.

Here's where Twilight of the Elites comes in. The United States has been losing to public choice theory. Our gigantic security apparatus missed 9/11. We invaded a country based on lies. The president and his closest advisers developed a torture regime in flagrant violation of our most fundamental laws, and remain free to this day. We stood by helpless as one of our great cities was devastated. Our financial sector first caused an enormous crisis and then received almost no sanction for it. (They continue to siphon off a tremendous fraction of the economy, with efficiency less than in 1910.) In short, we have developed a galloping case of the extractive institutions.

All elites, given half a chance, will turn extractive. This isn't a novel insight, and Hayes doesn't claim it is, but it's still true. Aside from WNF, Fukuyama's grand work The Origins of Political Order is full to bursting with failed societies who were bled dry by rapacious elites. It's what did for the Mamluks, the Ottomans, ancien régime France, and Imperial Spain, among others. "Elites" should be construed broadly; private interests can be just as voracious as any government. Extractive nobles, not kings, are what destroyed Medieval Hungary.

Traditional norms are being broken by the score. From Bush and Cheney getting away with evil, illegal acts, to the twisted wreckage that is the Senate, to financial corporations getting away with institutional fraud scot-free, to a vicious war on whistleblowers while ignoring the actual criminals revealed, our government is increasingly concerned with maintaining its own power at all costs, and corrosive cynicism about official integrity is more and more common. Rot has set in.

Traditional media oversight has been undermined by failure and conservative propaganda. The run-up to the Iraq war badly discredited the establishment media, and cynical movement conservatives have deliberately undermined it further. Hayes provides a striking vision of an alternate future:


Imagine how the Civil Rights Movement would be received were it to happen today. Fox News would work ceaselessly to convince Northern audiences that the protesters were in fact Marxists and subversives and posed a violent threat to the American way. Sleazy interviews with [Martin Luther] King's various mistresses would appear on segregationist blogs, while right-wing activists would gleefully videotape and disseminate embarrassing interviews with bewildered protesters.

Ability will not save us. This is the big concept of TOTE. Our current system of producing elites is based on the meritocracy, which is mostly measured around intelligence and accomplishment. As he writes, intelligence, especially a lot of it, is dramatically overrated. It is certainly impressive, and can be really intimidating, but absent other qualities brilliant people are just as likely to use their ability to think up convincing rationalizations for whatever they want to believe, or engage in straight-up corruption. As Hayes writes, "wisdom, judgment, empathy and ethical rigor are all as important, even if those traits are far less valued. Indeed, extreme intelligence without these qualities can be extremely destructive." In the end, all the ability-based meritocracy has produced is a generation of elites smugly convinced that they actually deserve to be on top, devoid of any sense of social responsibility, and just as incompetent as any inbred aristocracy.

(Chris Mooney makes a good point about this in The Republican Brain. Ostensibly one would think that the better someone is at reasoning, the more likely they would be to reach correct conclusions. Not so. Polls show that the more educated Republicans are (which I think is a decent proxy for reasoning ability, though obviously not perfectly correlated) the more likely they are to be climate deniers.)

To sum up: Chris Hayes has written a brilliant, deeply-felt testament to watching a great country eat itself from the inside out, and Acemoglu and Robinson show what will happen if we keep on our present course. You should read them both.