By Ryan Cooper April 20, 2012
Felix Salmon was flipping through a recent book by David Rothkopf, and found some striking evidence for Chris Hayes' theory of rot in the meritocracy recently: 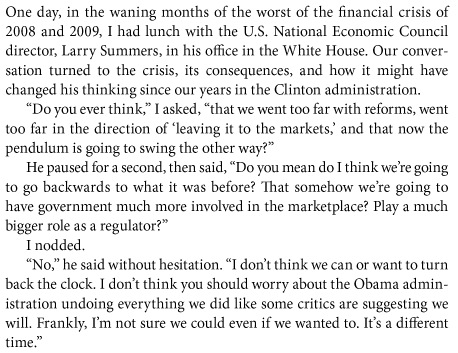 Later there's a similar interview with Robert Rubin. Both Summers and Rubin are clearly brilliant people, and the products of the most prestigious educational institutions in the world. Summers entered MIT at 16, and was a tenured professor at Harvard by 28, one of the youngest of those in history. Rubin has degrees from Harvard, the London School of Economics, and Yale. Yet they both espouse beliefs that I am quite confident in labeling total horseshit.

Am I so arrogant to think I'm smarter than these two? Nah. I bet either of them would whup me good on the SAT. These men are just being human. To admit that deregulation is a problem would be to say a large part of their lives' work--probably the most important part--was a terrible, catastrophic mistake. It's an extraordinary person indeed that will cop to being a principal architect of the greatest recession in 80 years. This reminded me of something Matt Yglesias wrote awhile back about Hjalmar Schacht, the Nazi economic wizard:


...part of what's so incredible about it are that Schacht's two great achievements—the Weimar-era whipping of hyperinflation and the Nazi-era whipping of deflation—were both so easy. The both involved, in essence, simply deciding that the central bank actually wanted to solve the problem.

And the answer really just comes down to refusal to admit that a mistake had been made. To halt the inflation, the Reichsbank would have to stop printing money. But once the inflation had gotten too high for Reichsbank President Rudolf Havenstein to stop printing money and stop the inflation would be an implicit admission that the whole thing had been his fault in the first place and he should have done it earlier. It was easier to say that hyperinflation was a necessary consequence of allied demands for reparations payments and that he had no choice but to print currency in the quantity demanded ... So things continued for several years until a new government brought Schacht on as a sort of currency czar. Schacht stopped the private issuance of money, launched a new land-backed currency and simply . . . refused to print too much of it. The problem was solved both very quickly and very easily. His later work helping Hitler rebuild the German war machine was a bit different, but again essentially just involved looking at what the previous failed policy had been (gold standard and deflation) and doing the reverse.

The institutional and psychological problem here turns out to be really severe. If the Federal Reserve Open Market Committee were to take strong action at its next meeting and put the United States on a path to rapid catch-up growth, all that would do is serve to vindicate the position of the Fed's critics that it's been screwing up for years now. Rather than looking like geniuses for solving the problem, they would look like idiots for having let it fester so long.

I wouldn't go so far as to say running the Fed, for example, is easy, but I would say that intelligence is only one of many qualities necessary to run it well, and probably not the most important one. When looking to make a hire of that kind one should also consider humility and wisdom, among other things, and as Matt says, make sure the "reputational incentives ... point in the direction of [running the agency well]."

[UPDATE: Also, leaders should be doubly skeptical with super geniuses so they're not being snookered by dazzling displays of ability. If anything, the very intelligent will be more vulnerable to this kind of biased reasoning on account of being brilliant tends to make a person arrogant and overly certain.]

A solely intelligence-based meritocracy is a lousy way to set up an institution.