Where taxes can be raised

By Ryan Cooper March 13, 2012
So Kevin Drum is in the midst of an argument with Ezra Klein over his latest New Yorker article. Ezra says the president isn't that good at convincing people, while Kevin disagrees somewhat. I think they both make good points, but I was struck by this passage from Kevin:


Before 1980, it was possible to raise taxes both locally and at the federal level. After 1980 it became virtually impossible, and after the early 90s it became very nearly literally impossible. In Congress and at the polling place, where it really matters, public opinion was loud and clear: higher taxes were a killer.

I completely agree when it comes to the federal level (obviously), but I immediately thought of my old rinky-dink hometown of Cortez, Colorado, population ~8500. It's a pretty conservative place--our representative is the ur-shmuck Tea Party hack Scott Tipton. You see, a few years back people had the idea that the local government should build some kind of recreation center. Neighboring Durango, a bigger, far more liberal town, had one, and it was working out well for them. So someone organized enough signatures to put a small sales tax increase on the ballot to pay for its construction. Fat chance, I thought.

But you know what? The damn thing passed! This tiny rural town, full of proud Republican truck-driving rednecks, had voted themselves a tax increase for a public service. I was astonished. And furthermore, it was completed close to on time and on budget, and turned out quite nice! For a middling-to-poor small town it's downright sumptuous. It's got a rock wall, basketball and squash courts, a gym, indoor track, some conference rooms, and a fairly elaborate pool, where I worked as a lifeguard for a time: 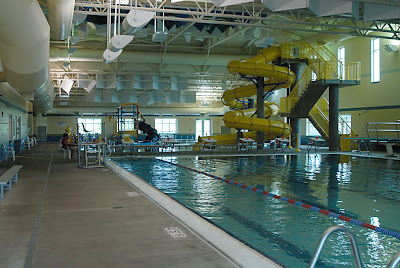 I'm not sure what the lesson is here. Maybe people will agree to raise taxes if and only if they can see the immediate benefits. But it didn't feel that way to me. It felt more like an issue of trust. Cortezians knew the people in government, and trusted their money wouldn't be wasted (or not too much anyway), and their trust was reinforced when the project came in more-or-less as promised. Something opposite obtains at the federal level—what Francis Fukuyama might call a low-level equilibrium trap.

UPDATE: The conclusion is a little vague here. Let me sum up: American government is vulnerable to fanatical, take-no-prisoners behavior, so the continuing conservative anti-tax crusade partially relies on government fecklessness at the federal level as proof of their (self-fulfilling) prediction that government can't do anything right in a way that doesn't work at the local level.