*The Rent Is Too Damn High* part 1 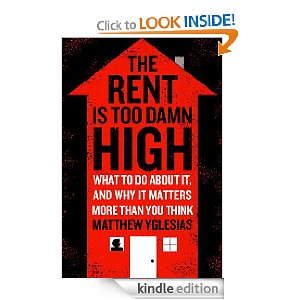 I just pounded this thing (it's not long, maybe an hour or two's read). I actually finished awhile ago, but I've had a few things at work to do first. I won't do a full-scale review here, rather a series of posts on things I find worth mentioning.

Anyway, it's good stuff. It's solidly written and very well-thought out, though sometimes his penchant for hyper-literal argumentation makes things a little stale. Yglesias builds paragraphs like an engineer building a basement out of cinderblocks--it's solid, and functional, but hardly elegant. This is a minor quibble, and surely better than the converse. As far as the actual thesis, for long-time fans there's not much new, but the various parts of the argument have a new power all brought together in one place. It's well worth a read.

The first thing I'd like to highlight is the section on sprawl. Basically, the argument is that the more expensive the urban core becomes through restrictions on density, and the more the automobile is subsidized compared to trains and buses, the more sprawling suburbs will be created to house people who don't want to pay high rents. Sprawl can thus be seen not as a moral failure of the American people, but as a basically logical response to goofy land-use regulations and car subsidies. This makes sense. However, this phrase jumped out at me:


The sprawl phenomenon sometimes attracts too much criticism from people who have aesthetic objections to it and who ignore the deep logic of car-centered development (Locations 320-321).

I think Yglesias misses an opportunity here. Later in the book he outlines the strong environmental rationale behind greater density, and indeed, the case is airtight. Cities are far better for the environment compared to the alternative of spreading those people out over the land, which is something classic environmental writers have sometimes missed. Edward Abbey, for example, once wrote:


At what distance should good neighbors build their houses? Let it be determined by the community's mode of travel: if by foot, four miles; if by motorcar, twenty-four miles; if by airplane, ninety-six miles.

This is madness. But it comes from a deeply-held sentiment in the environmental movement: an aesthetic and moral appreciation for the land, and an abhorrence to the pollution and disconnection from nature represented by cities. You can draw a basically straight line between Thoreau and this idea. In the same book, Abbey wrote on Los Angeles:


That was fifteen years ago. And I still have not seen the fabulous city on the Pacific shore. Perhaps I never will. There's something in the prospect southwest from Barstow which makes one hesitate. Although recently, driving my own truck, I did succeed in penetrating as close as San Bernardino. But was hurled back by what appeared to be clouds of mustard gas rolling in from the west on a very broad front. Thus failed again. It may be however that Los Angeles will come to me. Will come to all of us, as it must (they say) to all men.

I think this attitude is worthy of more than just casual dismissal (that's still one of my favorite books). The outer suburban rings of Phoenix, for example, really are a blighted dystopian hellscape, with endless identical Santa Fe-style tile roofs marching into the hinterlands like some great fungal outbreak, and the horror inspired by them and their ilk could constitute a powerful political force to be harnessed. What those kind of environmentalists need to understand, and what Matt could tell them (and does tell them, rather obliquely though), is that the worst parts of cities—the sprawl, the pollution, the bland sameness, the endless traffic—are not something inherent in the cities themselves, and furthermore not living in them drastically increases one's output of carbon dioxide.

If one (correctly) has a strong aesthetic dislike for the excesses of suburban sprawl, a love for unspoiled wilderness, and a concern about greenhouse gas emissions, there are actually some reasonable solutions to all those things. Instead of apocalyptic rants about how awful sprawl can be (or, perhaps, in addition to that) one should support removing restrictions to density in the urban core.