By Ryan Cooper March 02, 2012
Yglesias has a pretty amazing graph: 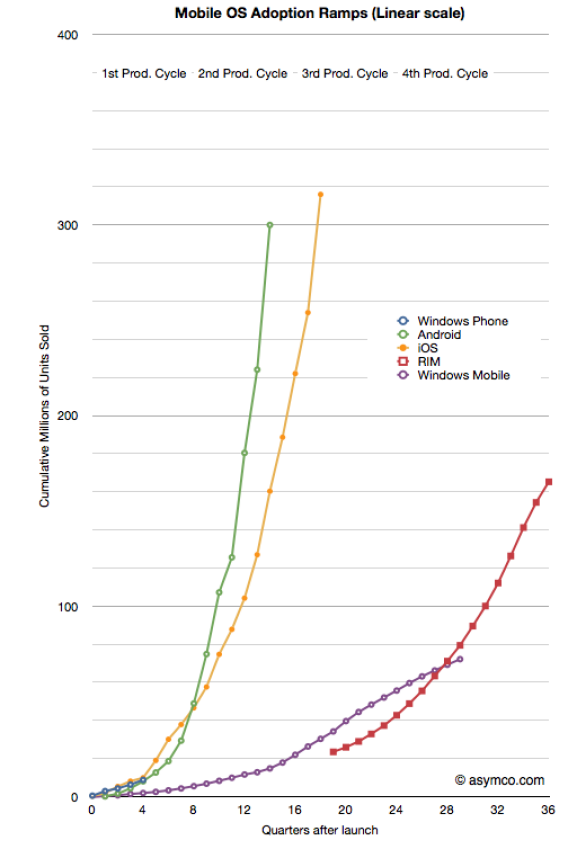 He was also emphasizing the other day the issues with Google's "give stuff away free" business model:

There is an important exception to this. Google did not develop Android from scratch. Let's back up a bit, and read a bit of that classic Neal Stephenson essay "In the Beginning Was the Command Line," and his great car analogy for the big operating system companies:


Imagine a crossroads where four competing auto dealerships are situated. One of them (Microsoft) is much, much bigger than the others. It started out years ago selling three-speed bicycles (MS-DOS); these were not perfect, but they worked, and when they broke you could easily fix them.

There was a competing bicycle dealership next door (Apple) that one day began selling motorized vehicles--expensive but attractively styled cars with their innards hermetically sealed, so that how they worked was something of a mystery.

The big dealership responded by rushing a moped upgrade kit (the original Windows) onto the market. This was a Rube Goldberg contraption that, when bolted onto a three-speed bicycle, enabled it to keep up, just barely, with Apple-cars. The users had to wear goggles and were always picking bugs out of their teeth while Apple owners sped along in hermetically sealed comfort, sneering out the windows. But the Micro-mopeds were cheap, and easy to fix compared with the Apple-cars, and their market share waxed.

Eventually the big dealership came out with a full-fledged car: a colossal station wagon (Windows 95). It had all the aesthetic appeal of a Soviet worker housing block, it leaked oil and blew gaskets, and it was an enormous success. A little later, they also came out with a hulking off-road vehicle intended for industrial users (Windows NT) which was no more beautiful than the station wagon, and only a little more reliable.

On the other side of the road are...competitors that have come along more recently...Linux, which is not a business at all. It's a bunch of RVs, yurts, tepees, and geodesic domes set up in a field and organized by consensus. The people who live there are making tanks. These are not old-fashioned, cast-iron Soviet tanks; these are more like the M1 tanks of the U.S. Army, made of space-age materials and jammed with sophisticated technology from one end to the other. But they are better than Army tanks. They've been modified in such a way that they never, ever break down, are light and maneuverable enough to use on ordinary streets, and use no more fuel than a subcompact car. These tanks are being cranked out, on the spot, at a terrific pace, and a vast number of them are lined up along the edge of the road with keys in the ignition. Anyone who wants can simply climb into one and drive it away for free.

Customers come to this crossroads in throngs, day and night. Ninety percent of them go straight to the biggest dealership and buy station wagons or off-road vehicles. They do not even look at the other dealerships.

Of the remaining ten percent, most go and buy a sleek Euro-sedan, pausing only to turn up their noses at the philistines going to buy the station wagons and ORVs. If they even notice the people on the opposite side of the road, selling the cheaper, technically superior vehicles, these customers deride them cranks and half-wits...

The group giving away the free tanks only stays alive because it is staffed by volunteers, who are lined up at the edge of the street with bullhorns, trying to draw customers' attention to this incredible situation.

Obviously, this was written in 1999 and much has changed, but it's still broadly accurate. I learned to use Linux in South Africa because it is basically immune to viruses, which are rampant on PCs in South Africa, and when I came home and got a new (cheap) laptop, I installed it (Mint, if you're curious) alongside Windows 7. It's a great OS. While Windows and OS X are a lot more polished, more fundamental rooting-in-the-innards things are vastly, vastly easier with Linux. Most servers and other huge computers that need an OS that absolutely will not crash use Linux or something similar.

What does this have to do Android? Android is based on Linux. Later in the essay Stephenson recommends that Microsoft and others should just get out of the operating system business and unite around Linux. Apple and Google have basically done this. Apple's OS X and iOS are based on Unix (so they are like Linux's cousins), and Android is completely based on Linux. Except where Stephenson envisioned a single, open standard OS distributed for free hacker-style, Google and especially Apple saw a lot of free labor they could swipe, alter a bit, polish to a high gloss, and wall off. I should emphasize that Apple is by far the worse offender here. Where Google is kinda halfheartedly trying to compile your personal information and make you buy their stuff, Apple has deliberately crippled their devices (particularly the iPhone and iPad) to force you into the Apple ecosystem.

However, let me end on a small high note. When I tried to access my girlfriend's iPad using Windows so I could give her some of my (public domain! some of them!) ebooks, it wanted me to download iTunes and sign in to the Apple store, and then wouldn't let me just transfer the goddamn files. However, when I tried it with Linux, some hacker had already figured out how to bypass the iPad file blocks, and built it into the Linux infrastructure. After a bit of fiddling, I could get past even the Great Wall of Apple.