Goldman Sachs is not a trading company 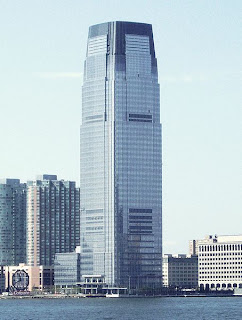 The big news in financial circles is one Greg Smith's scathing exit memo on departure from Goldman. According to Smith, as Matt Taibbi pointed out all those years ago, Goldman really is a morally bankrupt con operation that makes money by screwing its clients. Matt Yglesias theorizes that this is about a change in business strategy for them:


Translating out of indignationese, point c) is that trading is now the focus of the business. Points a) and b) are indicating that the client-advising side of the business is now compromised for the sake of the trading side. If that's true, then Smith is probably correct that clients will gravitate away from Goldman in the long term. But his claim that that spells death for the bank is wrong, that would just mean a further transformation of the focus of the business away from advising clients and toward trading.

Yglesias appears to be badly mistaken here. On a tip from one of his commenters (ht: shubik), I checked out Goldman's latest financial disclosure reports (for 2011), and in their 10-K form (pdf) there is a table describing their operations. Investment banking, investment management (both of which are for clients), and institutional client services make up 93 percent of Goldman's revenue. The latter by itself accounts for 60 percent. Their "investing and lending" section makes up 7 percent, but actually showed a $531 million loss, which might be why they closed two trading desks earlier this month.

So no, Goldman is not focused on trading, unless all those disclosures are also lies. For more possible explanations of how Goldman could still be in business, see Noah Smith.