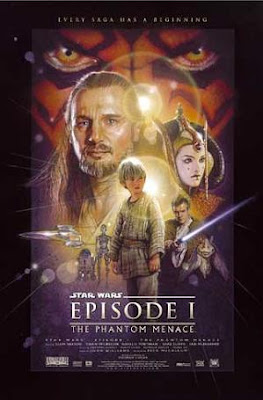 Pardon me, I'm just recovering from pounding every review on this section of Red Letter Media, and trying to figure out just why they were so compelling. (I'd recommend watching at least the Phantom Menace review, just to get a taste. Trust me, it's worth it.) They're the first reviews I've ever seen that are in some cases almost as long as the films themselves—but they're so enjoyable I watched the ones even for movies I hadn't even seen before. Anyway, here's my bullet-point list:

1. They're really funny. That's the most obvious good part. The timing, delivery, and visuals are really good, and show some obvious hard work. The dude's wheedling drone was also great. I'm hearing it in my head now reading other people. The joke about how Lucas changed the title of Return of the Jedi (in the Sith review) had me cackling hours later. (The rape jokes, on the other hand, for me went too far in places.)

2. They go through the plot with a fine-toothed comb. I've never seen someone take so much care in explaining just how everything in these prequels makes no sense on the most basic logical level. I've been chipping away at a novel, and it gives me a good sense of how you would go through to tighten up the plot and make sure everything fits together.

3. They're great criticism. I thought at first that they would just be funny takedowns, but they actually reveal serious love of film and of the original series. They explain really clearly why the original films work so well. Obviously the first Star Wars weren't super-great art, but they clearly got something right. As a hyper-literal science guy, good, clear art criticism that I can understand is rare. As Keith Humphreys said the other day when talking about the usual art critics:


Perhaps I am too “low church”, but when I read art critics, I usually think three things:

1) I have doctoral level education, and I can barely understand what you are saying
2) I suspect that you are writing more about yourself than the artist in question
3) You are making it harder rather than easier for people to get something out of the experience of art

Many people are intimidated by art and thus shy away from it. Jargon laden art criticism makes this problem more rather than less acute, and that makes me mad both on my own behalf and on behalf of other people who miss out on the richness of art because high-end criticism makes it seem over their head. In contrast, although it probably gets derided as mere “art appreciation class” instead of serious criticism, I am quite grateful when an expert relates plain-spoken observations about a painting that help me understand it better.