Colorado could be a renewable energy powerhouse

By Ryan January 22, 2012
From this extremely encouraging post by James Wimberley:


Take my three resources, together more than enough to meet all US energy needs. The overall picture is clear. Colorado has everything. South and West of Colorado has solar. North-East of Colorado (the Plains) has wind. The Rockies have geothermal. The Northeast has nothing apart from offshore wind (which generates temporary construction jobs but not rents).

This map, in particular, ought to have Colorado politicians'—particularly those on the Western Slope—eyes bugging out of their heads: 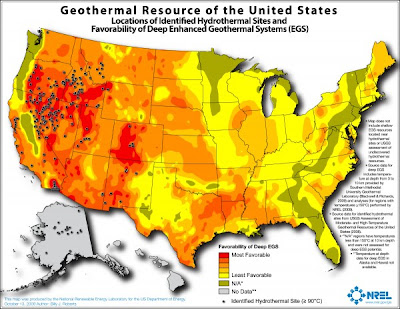 Ya-hoo! I'm smelling me a geothermal bonanza! A good time for, say, Scott Tipton to be lobbying for some tax credits. As Wimberley says:


At present geothermal is is numerically insignificant. I put it in because I bet this will change. Geothermal is the Mercedes of renewable energy: it’s expensive but top quality. Íslandsbanki (the Icelanders are experts on this) give the capital cost per kw capacity at $4,000, against $2,600 for solar PV and $1,900 for wind. Since the big cost in geothermal is drilling, a mature technology, geothermal costs aren’t likely to come down as fast as those of its rivals are doing. However, with hot dry rock fracking , there is orders of magnitude more recoverable geothermal energy than used to be thought. It’s technically beautiful: reliable (95% capacity factor, beating everything else), safe, frugal with land. As we push the load management envelope with cheap but variable wind and solar, geothermal will compete with storage for the high-cost zero-carbon baseload.

It's coming, sooner or later. No better time than now to be making those initial investments in plans and right-of-way.