We don't need no water

By Ryan December 09, 2011
The Eurodämmerung seems to be continuing apace:


Angela Merkel wants to use the EU institutions to police government budgets and financial rules. David Cameron had the idea of using the fact that Merkel would need his support to get that done as leverage to get her to agree to water down ideas about a financial transaction tax. Merkel didn't back down, and Cameron didn't back down either. So now Merkel's plan seems scuttled, which I think is exactly what I would have done if I were Prime Minister of the United Kingdom. But the rules of British politics seem to be that you must subject the PM to withering criticism any time anything newsworthy happens, so they seem to be going with the line that Cameron erred in letting Britain become "isolated" when defter manoevering would, allegedly, have gotten him a feisty coalition of Swedes and Hungarians to stand at his side.


It all adds up to one of the most disastrous summits imaginable. A continent which has risen to multiple occasions over the past 66 years has, in 2011, decided to implode in a spectacle of pathetic ignominy. Its individual countries will survive, of course, albeit in unnecessarily straitened circumstances. But the dream of European unity is dissolving in real time, as the eyes of the world look on in disbelief.

I am getting increasingly cavalier about this whole thing. Bugger European unity, the cure is making the disease worse. Here's a chart of the "Taylor rule," which is a rule of thumb about how a central bank should manage its monetary policy. (Taken from this great round-up by Kevin Drum, which is more thorough but comes to the same conclusion.) 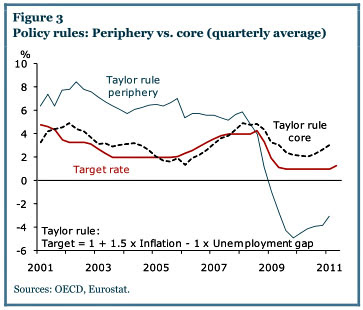 It's clear that, as various Euroskeptics predicted, the Eurozone is an insane currency area that has never worked and will never work. The ECB demands austerity for backstopping sovereign debt, solving the immediate crisis, but that will just make the underlying problems worse. Ezra Klein:


But the truth is, Europe can have all that and still fail because the crisis has another powerful driver: slow growth. The Organization for Economic Cooperation and Development projects that, continent-wide, Europe will grow 0.6 percent in 2012 and 1.7 percent in 2013. Remove the strong performers like Germany and the Netherlands and it’s quickly apparent that the growth prospects for the others are grim.

The masses across the periphery won't take this forever. Sullivan:


So what we've got is a plan for serious austerity, enforced by Brussels and destined to pummel the economies of the peripheral countries even further. So forget the British veto, the real threat to the EU is that, at some point, the peripheral countries risk becoming less autonomous within the EU than the individual states are within the US, during what could become the worst depression since the 1930s. If you don't see future strife built into that formula, you are a more optimistic reader of history than I am.

We already have Germans dictating government fiscal policy in Athens and, to a lesser extent, Italy. Neither country has a democratically elected government. And so we see that Europe risks degenerating into a Franco-German bully zone, and in an era where democracy is resurgent in the Middle East, it is retreating in Europe. Does anyone think this is feasible in the long run? That the publics in countries whose economies are being effectively run by Berlin won't buckle at some point - especially if the core problem of an imminent new depression remains likely.

I think most European countries would be reasonably happy as long as they have a chance of growth and the various states aren't organizing to murder each other. The Euro's time has come. Time to rip off the band-aid.