How did Tom Brokaw write a book about national service without discovering Americorps?

By Ryan November 14, 2011
AmeriCorps, as noted before here, is the largest national service organization in the United States outside the military. More than 80,000 people every year do service work in this program across the country for a pittance. Its support has historically been broad-based and bipartisan, with one consistent complaint. Despite the fact that today nearly three times the number of people have served in AmeriCorps than the Peace Corps, the latter is still far more well-known. As John McCain noted in the Monthly in 2001, the program’s profile is too low:


But for all its concrete achievements, AmeriCorps has a fundamental flaw: In its seven years of existence, it has barely stirred the nation’s imagination. In 1961, President John F. Kennedy launched the Peace Corps to make good on his famous challenge to “[a]sk not what your country can do for you, but rather what you can do for your country.” Since then, more than 162,000 Americans have served in the Peace Corps, and the vast majority of Americans today have heard of the organization. By contrast, more than 200,000 Americans have served in AmeriCorps, yet two out of three Americans say they have never heard of the program.

There is a good reason for this; the program was designed to be as decentralized as possible, which is a large part of its success. Many AmeriCorps workers are distributed to already-existing NGOs and other service organizations where instead of doing grunt-level work, they recruit and manage actual volunteers, giving those organizations the needed logistical backbone operate much more effectively—as McCain notes, each AmeriCorps member generates on average nine additional volunteers. Most of the money is put in the hands of state governors, who get to decide (within reason) which organizations get it. 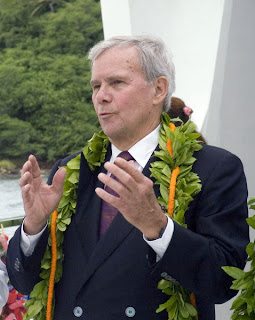 All this creates broad-based, bipartisan political support, but at the expense of a high national profile. It is of a piece with what Suzanne Mettler calls the “submerged state, ” where beneficiaries of a government program often do not realize they are beneficiaries—according to McCain, even some AmeriCorps members do not realize they are working for the government.

There was a glaring example of this lack of recognition recently. Tom Brokaw just wrote a book called The Time of Our Lives, a goodly slice of which was devoted to national service, and in it did not once mention the AmeriCorps program. In an interview with Andrea Mitchell promoting said book, he mentioned that perhaps the country needs some kind of rapid response team to deal with natural disasters, specifically mentioning the tornadoes that recently hit Joplin, Missouri. The truth, of course, is that AmeriCorps members were actually there helping to clean up and rebuild after that tornado outbreak.

On one level, Brokaw should know better. Surely part of the reason AmeriCorps is so low-profile is that he and other elites who claim to be very supportive of national service can’t be bothered to do some cursory research.

But the government should be doing a lot more as well. One can imagine several ways to build AmeriCorps’ public profile, like McCain’s idea for a highly visible AmeriCorps flagship program, or even just a public service announcement featuring the president, as JFK provided for the Peace Corps. AmeriCorps ought to permeate the national atmosphere to such a degree that by default it forms the backdrop of any discussion of national service, so even Tom Brokaw couldn’t possibly overlook it.