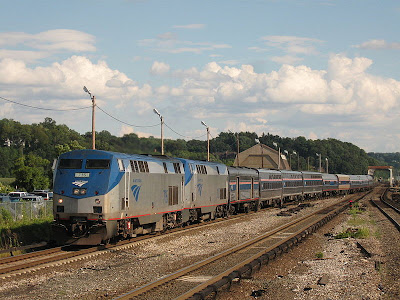 TNC reports back from his decision to abandon flying in favor of trains:


Last week, I began my attempt to opt out. I was scared I'd be bored to tears, but at the same time I didn't feel like I should be too entertained. I declined to install the Baldur's Gate saga on my laptop, and resolved to bring only my books and my writing. It's true I endured a few askance looks from my wife, but once I explained my thinking, she was in support.

The train, in all aspects, was a superior experience. The first thing was the feeling of everything melting away, of someone else taking control. When flying there are generally so many rules to be obeyed, and times when specific things can happen that I generally feel like, as a passenger, I'm actually a co-pilot. Lights tell you when you can and can't move. Announcements indicate (because I use a lap-top and iPad) when it's safe to read, write or listen to your music. Food and drink are administered at precise times. All of this within a confined space.

But there was a freedom on the train that you may need to be taller than six feet to really understand. You could walk as you needed to. You could sit in the cafe car and watch the scenery. You could fall into your book. Or you could just sleep, something I can't really do on airplanes.

Finally there is the fact that, as much as possible, I should avoid supporting airline travel in its current American iteration. As I said before I don't do this expecting any kind of policy change--but The God of Policy is not omnipotent. I expect an end to that sick feeling I get whenever I see passengers arbitrarily herded into full-body scans, or stranded on runways for hours, or yanked from their seats and stripped searched. There is still value in looking oneself in the mirror--whatever one might hope to see. Thoughtful resistance, in and of itself, is valuable.

I heartily support this preference, even if it has no real effect. Airplanes and the whole associated security theater have become a nearly intolerable nuisance, and for about zero tangible benefit.