Why South Africa's public transport is better than America's 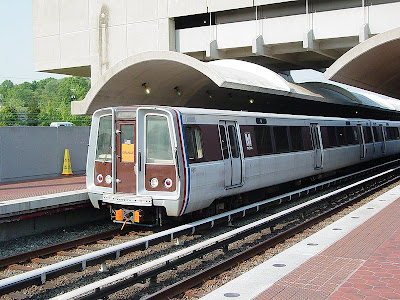 Some time ago I made this case, and I had a pretty good discussion with my old friend Noah in the comments, so I'd like to work that up into a single post.

So: let me start with the DC Metro, since I take the Red Line to work every day.  Though, on reflection, the New York subway is probably better overall, the DC metro is still better than any single public transport system in South Africa.  It's cleaner, safer, and more efficient than everything save the Gautrain, and, comparing these two government reports, carries more passengers even than the Johannesburg metrorail network.  Given our better-educated, better-trained, and far richer tax base, it's no surprise that when we put our minds to it, we can put together a very effective transport system.

But where South Africa is crushing us into the dirt is in the most important area: capacity.   According to the South African National Household Travel Survey (pdf), fully 40% of all South African commuters use public transport (mostly share taxis), while the figure for America is about 5% (pdf), and most of those are in a few large cities.  I don't think one can really credit the South African government for being stupendously far-sighted here; they have basically the kind of system one would expect to develop naturally given their situation, but they are still in a far better position than America to respond to rising oil prices and the like.

America's lack of public transport, on the other hand, is largely due to a lot of deliberate policy decisions that look, in retrospect, stupendously shortsighted.  Yglesias had a good item on this awhile back pointing out that Puerto Rico has a much larger highway investment than any other Caribbean island.

I'm reading Robert Caro's The Power Broker now, a biography about Robert Moses, probably the biggest and most influential builder of public works in American history, and this quote stood out:


By building his highways, Moses flooded the city with cars. By systematically starving the subways and the suburban commuter railroads, he swelled that flood to city-destroying dimensions. By making sure the vast suburbs, rural and empty when he came to power, were filled on a sprawling, low-density development pattern relying primarily on roads instead of mass transportation, he insured that the flood would continue for generations if not centuries, that the New York metropolitan area would be—perhaps forever—an area in which transportation –getting from one place to another—would be an irritating, life-consuming concern for its 14,000,000 residents.

Moses worked mostly in New York, and Caro's work was published in 1974, when New York was broke, derelict, and awash in crime.  Things have since improved a lot, and as this more recent New Yorker article mentions:


Caro points out, for example, how many subway improvements could have been bought with the money Moses spent on highways, but in Moses’s day cities all over the country were building highways at the expense of mass transit, and New York was far from the worst.

Fair enough.  But this only clarifies the issue.  It was nationwide policy, and the decisions of a bunch of people, that have left America nearly bereft of public transport.  Conversely, the personal car-based system we have today has almost nothing to do with the free market.