By Ryan October 04, 2011
Everyone knows that the Aughts had some of the weakest growth in postwar American history.


But one under-discussed part of this is just why this was. After all, Greenspan kept interest rates super-low for most of the Aughts.  According to standard monetary economics, that's supposed to be powerfully stimulative—so much so that we should have had a roaring, overheated economy with real danger of inflation.  So what happened?  According to Johnson & Kwak in 13 Bankers: 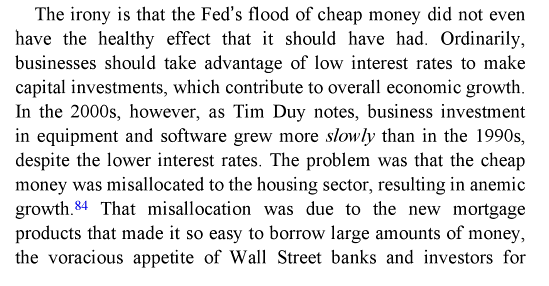 (Yves Smith, by the way, makes a similar argument in ECONned.) I had a back-and-forth with Kevin Drum over email the other day discussing why the all that money flowed into the housing sector rather than somewhere else.  The picture I'm beginning to put together here is basically threefold.  First, the pile of money involved in housing is, like, real big: 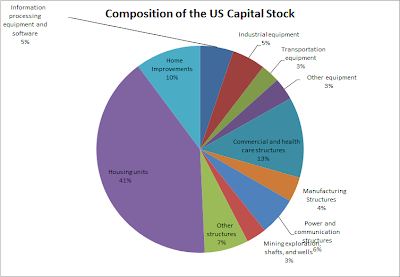 (Image from Karl Smith.) Obviously that's not precisely the amount of money available to banks, but it gives you a sense of the size of it.  Prior to all that "innovation" from investment banks, this pile was basically a sleepy backwater.  So here comes the second factor; the part of the crisis that has been done to death.  Banks used to give out mortgages and hang on to them for the duration of the loan, so they were understandably cautious about what kind of person was taking the money.  Fast forward through the "originate and distribute" model, tranched securities, CDOs and CDSs, blah blah blah, and banks were basically pouring money into the housing market, money that was in the end sent down the garbage disposal.

The third factor is general US policy to support homeownership; a bunch of tax credits and so forth.  (Conservatives' explanation of the crisis, by the way, rests entirely on the part of this factor that was going to minorities and the poor.)  This stimulated demand for housing and thus added a few RPMs to the mortgage doomsday machine.  Obviously this is quite loose and non-quantitative, but this combination of foolish policy and a careening, insane financial sector seems to have starved legitimate enterprises of the loans they would normally get during a period of loose money, loans that should have sparked a fierce economic boom.

Wall Street's only legitimate function is to allocate capital.  They can't even do that, it seems.