An intervention I can (reluctantly, provisionally) support 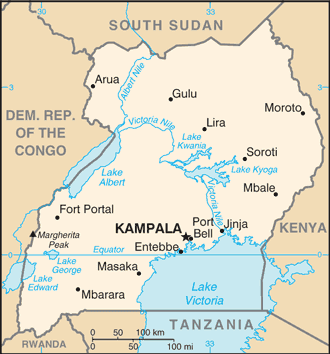 I've been thinking a bit about this Uganda thing, and I've gradually come around to the view that it's not necessarily wrong at this point.  First, there's a modicum of Congressional support; a bill authorizing military support of the Ugandan regime was passed back in 2009.  It was sponsored by Russ Feingold, of all people.  Obviously Congress has basically abdicated its oversight role when it comes to military affairs, but the fact that there's a fig leaf here is encouraging.

Second, this isn't about regime change.  The Ugandan government actually supports our presence; they say it's long overdue.  We're not, at this point, going to get involved in nation-building, or toppling a dictator, or whatnot.  I would have liked to see Obama push Museveni a bit more on his country's problem with anti-gay bigotry, but that's a minor issue comparatively.

Third, the Lord's Resistance Army really are some of the worst people in the world.  We're talking cartoon levels of villainy.  Random people on the street in Kinshasa are thanking Americans for this.  Fourth, it's (at this point) only 100 soldiers, and they're not supposed to be in a combat role.  The LRA is a bunch of ragtag militia, likely it won't take much more than that.  Finally, there's no obvious material gain for the US in this one.  I think the fact that we've only been "intervening" in Arab countries with huge oil reserves hurts our reputation more than some suppose.  This one, at least so far, looks to be actually mainly altruistic.

In a perfect world, I would have liked to see a bit more debate about this, but given the outrageous expansions of executive power in the last decade, I find it hard to get worked up about this one.  That's not to say it won't all go wrong, just that at this point it looks reasonable.  Lets hope it stays that way.