By Ryan October 11, 2011
Yglesias touches on something that has me frankly befuddled. One of the classic cures for a depressed economy is a bit of inflation. This does three things. 1) It encourages people and corporations with lots of money (and right now corporations are sitting on huge cash reserves) to spend it, as it will be worth less in the future. 2) Millions of people are mired in debt, the real value of which inflation will erode. 3) The dollar's trade value will fall, making our exports more competitive.

But a lot of economists, including (I think) Paul Krugman, say that in a depressed economy, it's impossible to get inflation going. Yglesias:


For starters, a little throat-clearing about the burden of proof. Many of the inflation skeptics have impressive resumes. What they don’t seem to have are empirical examples of central banks determined to raise inflation expectations and failing to do so. We don’t, unfortunately, have a directly parallel case to the current U.S. situation. But on my side I’ll cite as evidence the successful implementations of exchange rate policy by Sweden, Israel, and Switzerland during the current recession. Those, however, are small economy. So I’ll also cite FDR’s gold policy in the 1930s. That, however, was a gold standard. Then there’s QE 2. I would say we have examples of small open economies with determined policymakers doing this successfully. I would say we have an example of a large economy with determined policymakers doing this successfully under different historical conditions. And I would say we have an example of the Federal Reserving acting with only weak determination and achieving weak results. In my view that means our overwhelming presumption ought to be that a determined Federal Reserve system could increase nominal expectations, especially if the president and the treasury secretary supported that goal.

There are some sort of technical aspects to this, but on a basic level I just find it impossible to believe.  I mean, if Zimbabwe can do this: 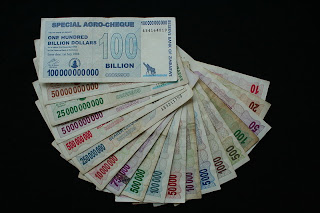 Then shouldn't Ben Bernanke be able to get 5%?

NOTE: If I were more famous, undoubtedly some conservative jackass would accuse me of demanding Zimbabwe-style hyperinflation in the US. That is most assuredly not what I'm saying.