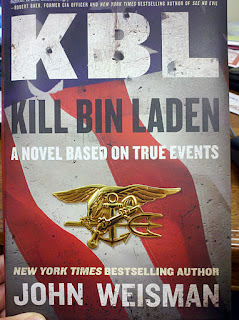 One of the great things about working at the Monthly, which I assume is also true of most other such publications, is that people randomly send you free books. Here's a review of a really bad one I did just for fun.


Back in May, Alyssa Rosenberg wrote:

As the details of the American raid that killed Osama bin Laden [come out], it was inevitable that somebody would observe (as many people did), that the operation was going to make a really fantastic action movie. Such a movie would be really hard to get right: it could easily be a cheap action picture, when this coda to the brokenness of our last ten years deserves a profound piece of art.

It was thus with some trepidation that I picked up Kill bin Laden, by John Weisman. Not knowing anything about the author, I had no idea what to expect. Would this be the profound piece of art the last miserable decade deserves?
That would be an emphatic no.
If, as Roger Ebert says, Nicholas Sparks writes "soft porn for teenage girls," this is right-wing murder porn for America's battalions of armchair commandos. The same vapid, predictable structure and cardboard-cutout characters as Sparks would have constructed, but more poorly written and with less imagination.
It's written as a novel, which I suppose is cover for the titanic amount of masturbatory fantasy the book contains. A man who in reality was a Pakistani-American translator, who came in with the SEALs on the night of the raid, is turned into a multiple amputee Pashto-speaking Iraq War veteran working undercover as a beggar. This man is at one point captured by a released Guantanamo Bay inmate, set loose by an Attorney General who spends "most of his time trying to indict CIA officers for doing their jobs but turned terrorists loose so they could kill more Americans," but he escapes, kills the terrorist in gruesome detail, beheads the guy with his own knife, and tosses the head into a river. I suppose the Pakistani-descent man—who was critical to the actual operation—had to be edited out, as Weisman routinely refers to Pakistanis as "Pakis," at one point even saying they "lack India's entreprenurial spirit."
The whole story is like that—the rough edges of reality smoothed over with sludge dredged up out of a right-wing fever swamp. The protagonist SEAL is a fervent Christian with a pregnant wife. The politicians are all spineless, opportunistic cowards who routinely leak sensitive intelligence—Obama is bullied into the operation by a CIA analyst, and a thinly veiled John Kerry nearly gets a (fictional) CIA man killed talking to the media. (The CIA man is, by the way, a fervent Christian with a pregnant wife.) All American consulates and embassies are riddled with host country spies. And the legendary diplomat Richard Holbrooke is smeared by name as a "sieve-like leaker" used to seed the media. Is it not libel if someone is dead?
The killing itself is depicted as a straight-up premeditated assassination. Some people "just deserve to die." Bin Laden's corpse is rendered in gruesome detail:

At least Nicholas Sparks isn't a necrophiliac.
And the writing sucks. It's an amateurish imitation of Tom Clancy (no Proust himself, but at least not distractingly awful), with a lot of macho details elaborated at great length, barrel diameters and gun brands and ALLCAPS military acronyms, stamped out like license plates in what had to be a feverish rush. No one drinks anything, they "take a pull." No one looks at anything, they "eyeball." Even the (only) sex scene is similar: "Secure your weapon...I'll be up to conduct an inspection in exactly six minutes."
Most bizarrely for a novel with this amount of military leg-humping and nightmarish imagery, the word fricking is used to preposterous excess. It's a weak, unrealistic word, and seriously undercuts the testosterone-drenched tone of the book. Anyone who's been around soldiers for more than ten seconds can tell you they don't bother much with words like "fricking." That's a word better-suited to a Presbyterian minister who has dropped a bowl of potato salad.
In short, you're better off with the latest Twilight fan fic.
It's a shame, because I agree with Alyssa. The country could use some help processing the last shameful decade. A one-dimensional revenge fantasy like this might have passed muster back in October 2001, but now it just feels pathetic.