Could a GOP president take credit for an accidental recovery?

By Ryan September 13, 2011
I totally agree with Yglesias's quibble here:


I half agree with the sentiments in Ezra Klein’s Bloomberg column about the importance of the 2012 election, but I think there’s a dangerously misleading idea lurking there. He quotes Larry Bartels’ brilliant exposition of the point (see this PDF but also this one) that you have to put FDR and the New Deal realignment in comparative perspective. All governments that were in office when the Depression hit lost power, and all governments that were in office during recovery regained it. The implication in the column seems to be a kind of nihilistic one, where economic outcomes are just driven by luck and a bad recession just so happens to take a long time to recovery from...

But the existence of some policies that promote robust recovery from the recession is a necessary ingredient to that mix. The policies we got in 2008 and 2009 were pretty good — they prevented calamity — but they didn’t promote robust recovery and that, rather than bad timing, is why Obama hasn’t benefited from an FDR effect. And whoever’s president in 2013 will have an opportunity — but just an opportunity — to do better on that score. You still need policies that work. It’s entirely possible that we’ll simply shift into a new equilibrium with a permanently elevated pool of long-term unemployed, permanently reduced labor force participation, slow growth, and stagnating living standards.

However, I remembered a couple earlier posts of his positing that perhaps the current housing shortage will eventually touch off a recovery. These charts below tell the story. We've got new housing starts at an all-time low: 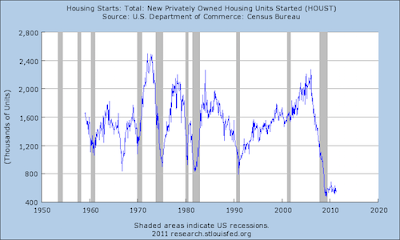 And persons per new housing start at an all-time high: 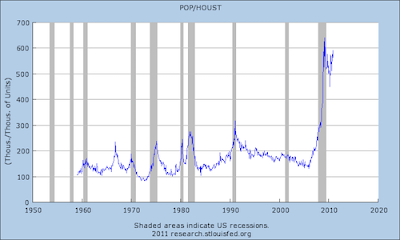 The idea is that eventually, new homes are going to have to be built. With a deeply depressed construction sector, even relatively small growth in new homes would mean a big surge in construction activity, which could spark a virtuous circle of economic growth.

I should note I'm not gunning for hypocrisy here. Again, I agree with Yglesias' point that smart policy is key to recovery from recessions. But it seems that in this particular circumstance, there could be a chance that some kind of recovery could come absent smart any policy intervention at all. After all, there were still recoveries long ago, before Keynes ever wrote any books.

Of course, on the other hand, a GOP president seems likely to ram through a bunch of austerity policies, in which case all bets are off.