What happens to the Peace Corps if we hit the debt ceiling?

By Ryan July 26, 2011
Kevin Drum has an alarming post (chart borrowed from the same): 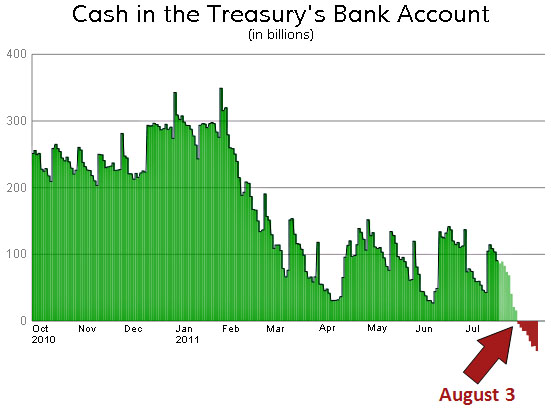 But starting on May 16, when we reached the debt ceiling and Congress did nothing about it, no more bonds could be sold. For the past couple of months Treasury has been playing games to stay in business, mostly by raiding other accounts or suspending payment of securities that could be held off temporarily. But that's done, and now we're headed inexorably to zero. On August 3rd we go into the red and we stop paying a whole lot of bills.

Which bills? Well, the tea partiers never say. But if you're expecting a check from the U.S. government after next Tuesday, you might want to make a contingency plan.

As it turns out, the government owes me something like $7000—my readjustment allowance, to be paid when I leave the country on August 19th. The idea is for every month in service Peace Corps will hold a bit of cash that they will pay out upon my end of service to ease my reintroduction into America, or wherever I might end up. As I understand it that money is actually deposited every month, so it should theoretically already be there safe and sound.

But still, it seems like we're in largely unknown territory.  A real default could induce so much chaos I don't think anyone can say for sure what would happen.  To say this is unsettling is putting it mildly.