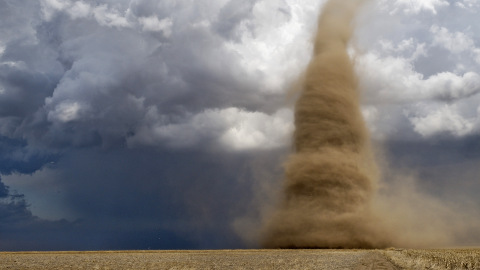 [This is an onion-style piece from my dad.]

Dateline June 24, 2011. Washington, DC. Reports that climate scientists have been apprehended igniting cataclysmic forests fires in 14 states have been difficult to confirm. “ Many of these science types are actually quite clever,” said Senator James Inhofe, chief the upper chamber’s climate change deniers. “They’ll be up in Minot breaching dikes in the morning and lighting a 60,000 acre wildland fire in Florida the afternoon. Senator John Kyl noted that he a personally chased off a suspicious person dressed in a lab coat and carrying a test tube when he went to see if his cabin had been consumed by the fire that has blackened 900 square miles of Arizona and continues to burn. Sarah Palin’s blog reported that climate scientists have discovered a way to cause the formation of class 5 tornadoes by use of a top-secret “cyclotwistorator” device that is about the size of a toaster. The machine was accidently plugged in at a top-secret climate scientist’s breakfast in Vermont this year and devastated much of the city of Burlington.

Reports from various sources of climate scientists whipping up terrific dust storms in the West have been validated by the unprecedented number of the events taking place in recent years. It is also probably no coincidence that the graph of the average temperature of atmosphere closely mimics the graph of the number of climate scientist world wide. “There’s no way you can ignore the relationship,” said Inhofe. “The explosion in the population of climate scientists is melting glaciers, drowning polar bears and killing coral reefs, which were once the nurseries of the sea. The facts are plain.” In Inhofe’s view, the idea that human activities may be causing earth’s climate to change is preposterous. “The earth was created for us. For us to replenish. I’m unclear on who plenished it in the first place, but its climate will always be ‘just right’ for incubating humans,” Inhofe said. “All climate-change realists argue backwards from this certainty. There may not be a stick left to burn in Arizona, or ice an cube in the Arctic. There may be half a billion starving Bangladeshis at my front door and the gulf Mexico lapping at my back (Mr. Inhofe is from Oklahoma) and I’ll still know what I know: this global climate change fraud is the biggest hoax ever perpetrated on the American public.”

The atmosphere and climate of our planet do seem to be in an exquisite balance between the near absolute zero of interstellar space and the 11,000 degree F of the surface of the sun. Climate scientists warn that the equilibrium is fragile and sensitive and point to evidence that the planet Mars seems to have once had free surface water but whose ancient oceans boiled off after a change in surface temperature of only a few degrees. Climate change deniers attribute Martian aridity to the rise of Islamic militancy on that planet and subsequent revocation of divine favor. “The purpose of humanity is to praise God, who discovered late in the game that the mollusks, crustaceans and ungulates he had been cranking out were ill suited for praise singing. It was either create a world for us or teach starfish to croon. The best way to maintain our balmy weather is stay in good graces with the supreme being, “Inhofe said. He suggested cutting funding for Planned Parenthood and the Women and Infant Care program as a way to avoid having the oceans boil.

While the refusal admit any human-caused alteration of the climate has become a matter of Republican orthodoxy, with former believers reversing their positions as fast as they can manage without anyone noticing, the issue seems to have fallen off the table for the Obama administration as well. “Our focus is jobs, jobs, jobs,” a spokesman said. “Climate change may be the biggest, toughest and most important question facing the nation and the world but we just don’t have the time, money or inclination to save the planet right now."