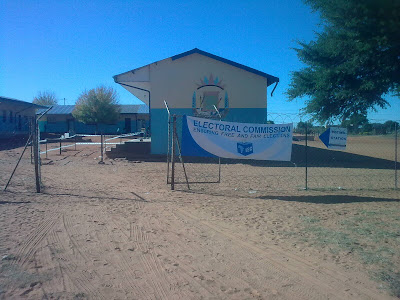 South Africa voted yesterday in the rough equivalence of midterm elections. To my amazement they actually set up a polling station, complete with official signs, officers and police in my tiny village. It's been an extremely visible campaign with the two main parties putting up signs all over creation in a mess of languages.

The two main parties are the African National Congress and the Democratic Alliance.  This was apparently the first election where the DA, traditionally the party of whites and Coloureds (mixed race) made a serious effort to get the black vote.  To my eye they had a much better-organized campaign, with their signs up long before the ANC's and a much larger media buy.  The DA strategy focused on service delivery, going with the slogan "We deliver for all" (or in Setswana, "Re direla botlhe," or in Afrikaans, "Ons leiwer dienste aan almal," or in Zulu...you get the picture) featuring commercials with a bunch of gogos (grandmas) talking about how things had been much better once the DA had taken over.  By the way, they also swiped Obama's famous round campaign logo.  The ANC's slogan was "Together we can build better communities," which was a lot harder to read from the road.  I never saw any ANC commercials, so I didn't get a clear idea of their strategy.

I'm not supposed to comment on local politics, so I won't say who I would have voted for, but I think it's worth noting that this was an utterly routine event procedurally.  Reading The Fate of Africa was grueling, but a great reminder that despite all the problems here, it could be a whole lot worse.  There's no strongman looting the country bare, no genocide, no ethnic civil war, no child soldiers and no invading foreign armies.  Instead it was a pretty garden variety election with parties competing over who can run the government better.  That is a very good thing.