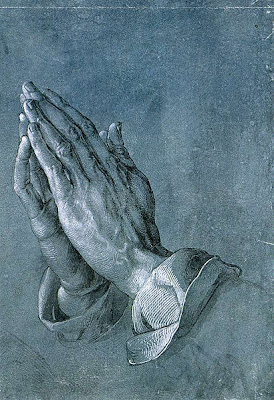 My mp3 player batteries gave about about two-thirds of the way through my bus trip back to Kuruman and so I was unfortunately forced to listen to a lot of Christian propaganda. What's more, they had a lame Christian movie going with the volume so loud that, though I used earplugs, I couldn't help following the plot. The Christianity-drenched part didn't bother me so much as the utterly atrocious production values and acting, but it did spark some questions in my mind.

Namely, what kind of God is implied by Intercape-style prayer? By the "Intercape" qualifier I mean to rule out the kind of prayer that characterizes a lot of Eastern or intellectual religious practice; examples might be straight up worship, where one is just paying mental tribute to the greatness of God, or meditation, where one achieves wisdom through the contemplation of God's diverse qualities. (Obviously, that's not an exhaustive list.)

Instead I'm talking about petitionary prayer, where one is actively asking God for something; be it a recovery from sickness, some kind of personal benefit, changes in the weather, or what have you. In the case of Intercape, they start each voyage by asking God for his protection and guidance. Seems reasonable enough, no one wants to die in agony by the side of the road.

But what does it say about God if this kind of prayer is actually effective? It seems to assume that God is watching things unfold, things he set in motion, and if the right quantity of prayer is delivered unto the divine postbox, he'll cure the illness, or prevent the disaster he would have otherwise unleashed, or give you the new job. Assuming the circumstances are right of course, and God doesn't have some larger purpose in killing your baby sister with leukemia. In that case, we say "Thy will be done." "God works in mysterious ways."

How cruel does this make God? What about all the people who are too sick to pray for themselves (or happened to be born into the wrong religion), and have no one to pray for them? Doesn't it to restrict his area of operation a little bit? Is he saying, "Well, I was going to help this child, but just one prayer short, guess she's got to die." Wouldn't he know and take the right course of action regardless of what people are asking for, at least when it comes to "acts of God?" If God is all-knowing, omnibenevolent, and perfect, it makes little sense to actually ask him for something expecting he will alter the course of events with a bit of magic.

The more reflective theologians get this, and make petitionary prayer just a way of psychologically preparing yourself:


The best example of such prayer is given by Jesus himself. Although he knew he would have to undergo suffering and death, and although he had already accepted this sacrifice, his human nature made him spontaneously pray: "Father, let this chalice pass me by". By praying in this way to his Father, Jesus disposed his human nature to receive the strength it needed for the passion.

Now as it happens I don't subscribe to this kind of prayer either, but at least it's considered here. But like Richard Dawkins often says, hardly anyone believes like a sophisticated theologian. The vast majority of Christians, as a quick perusal of Google News will show, pray like this all the time.

PS: The fact that I came up with this post in a matter of minutes certainly places it in the category of "amateur half-assed philosophizing that someone much smarter already considered much more thoroughly 2000+ years ago."  I'm not claiming originality here (nor a stupendous intellect), just drawing attention to the fact that a huge part of mainstream Christian practice has been considered preposterous by serious theologians for hundreds of years.