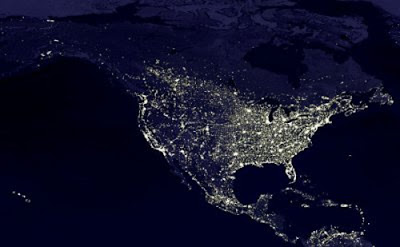 Light pollution is an under-discussed aspect of urban planning.  It is true that it causes damage to ecosystems (disrupting natural flight patterns and so forth), wastes energy, both from improperly directed light (meaning into the sky rather than at the ground) and over-illumination.  Even security lights are mostly useless, particularly the unshielded million-candlepower floodlights that frightened homeowners often favor.

But that's not what really motivates my interest.  One of the few aspects where I think rural living is definitely superior to urban is that you can see the stars more clearly (as opposed to the pernicious nonsense about "rural values").  The human capacity for adaptation is very great, and the corresponding capacity for awe is easily eroded—witness the collective shrug at the exponential growth of computing power over the last thirty years.  (My SIM card has more memory than the computer that landed Apollo 11 on the moon.  If that isn't staggering, I don't know what is.)

One area where this lack of awe is most glaring (so to speak) is with respect to our place in the universe.  The true insignificance not just of the human race, but of our entire planet, is literally impossible to grasp. I (perhaps foolishly) believe that if more people tried to grapple with that fundamental truth, the world would be a better place.  Cities inhibit this kind of thinking.  Surrounded by our amazing creations, the earth subjected and brutalized under thousands of tons of steel and concrete, it's easy to lose sight of the cosmic perspective.  Yet the logic of cities is unassailable.  New Yorkers, for example, use 75% less energy than the US average.

So reducing light pollution by the greatest possible extent is part of my harebrained scheme to bludgeon the human race with the cosmic perspective.  If the vast (and growing) number of people living in cities could each night look up and be confronted by the night sky's vastness, they might wonder why, as Watterson said, "why man considers himself such a big screaming deal."  And besides, the stars are beautiful!  Carl Sagan had some wise words on this subject: