South Africa as IT class 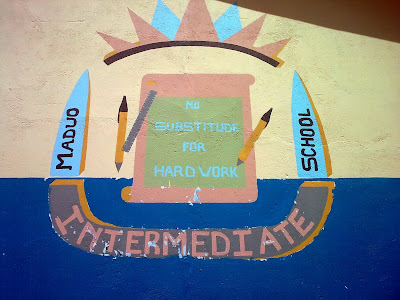 Longtime readers will know that my teaching experiment here has been something less than a success. There are a variety of reasons for that, most of them having to do with my own failings and lack of experience, but a simple one I haven't mentioned much is that rural South Africa is, in general, a lousy place to learn how to teach.

A friend of mine did Teach for America in New York, and while she is superior to me in most teaching-related qualities, it's instructive to compare the situation there to mine. Where I was entirely on my own in all respects—when I would ask the educators at my school what to do when the kids wouldn't listen, the sum total of their advice was: "beat them"—she had both colleagues with a deep reservoir of experience and serious accountability from the administrative level. This accountability, in the form of occasional classroom monitoring and close inspection of all required paperwork, would have been tremendously helpful for me.

But let's put that aside for a moment. If South Africa is a lousy place to learn how to teach, it is an equally great place to learn some basic IT. The school system and the NGOs are both provided with enough money that nearly all institutions have at least a few computers (and often large labs), and the average South African's computer skills are so shoddy (particularly regarding viruses) that those computers are very often crippled or completely nonfunctional.

This provides an excellent platform for experimentation. Often I will run into computers so borked that I could not possibly make them worse (short of bashing the motherboard with a hammer), so I feel justified trying all kinds of interesting stuff. Here's a partial list of things I have done for the first time here (some by myself, some with my friend Justin, some with my friend Noah):


-Install Windows XP
-Install a Linux distribution
-Install Linux from a USB stick (stupidly easy)
-Install Windows XP from a USB stick (much, much more difficult)
-Use Linux to clean viruses off a Windows machine
-Install both XP and Linux on the same machine
-Install LaTeX on a Linux box
-Use Emacs to format raw .tex files (M-f and C-e are my friends)
-Clone a hard drive
-Build a server
-Build a networked computer lab from scratch

Obviously most of these are pretty easy. (Except the last one, and I was mostly helping there. Justin was the point man on that particular project.  In any case, I don't claim to be an expert.) But they are far beyond most people's IT experience, and if you are at all interested in computers, it's a great, concrete, satisfying way to help out at site.