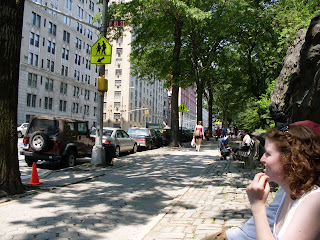 Working with James had its advantages. He had been there for years and knew the history of the store, which was far more interesting than I would have suspected. In the stockroom there was a massive metal grate leaning against the wall. I had never seen it used for anything, and asked him one day what it was for.

“This place used to be owned by a guy who was in with the mob over in Jersey. He didn’t pay them some money he owed and just disappeared one day. The store landed in his wife’s hands, and she didn’t know how to run the business. She ended up owing the city a lot in back taxes, and one day the city marshal just came by, forced everyone out, chained the doors shut, and cut the electricity. Well, this was the middle of summer and no one could get inside for about two weeks. Inside was about $200,000 in inventory. When the city finally finished with the store and we got back inside the smell was so bad the first guys had to wear gas masks. There were maggots and rats everywhere like you wouldn’t believe.” He tapped the grate. “Once we got the rotten stuff cleaned out, the stench was still awful, so we put these grates over the doors and let it air out for a couple more weeks. You could smell it for blocks.”

I actually enjoyed the work. I got along well with the people, and mostly enjoyed interacting with the customers. The stocking and inventory work had a soothing quality to it—“leveling,” or bringing all the stock to the front edge of the shelf and adjusting each so that the labels faced outwards was strangely pleasing. I would enter a messy, disorganized aisle and leave it gleaming and perfect. Creating order out of chaos, the simple pride of a job well done.

Even the inventory work at least wasn’t boring. The storage was in the basement, so when the inventory arrived on the truck we had to move some of it to the shelves immediately, some to the upstairs storage, and some downstairs. Outside of the aisles the place had a run-down industrial feel to it. The basement floor was caked with a half-inch of black grime in places, and the cardboard compacter was this massive Stalinist contraption that looked like it belonged in Blade Runner. Later, when that stock was needed, we’d have to move it back upstairs. Once upstairs, one had to scan each item to check the price and make sure if was in the computer. “Scan and mark,” James would say.

Then—my favorite activity: pricing. The pricing gun is a device that prints and attaches those little price stickers to an item. When pricing something ideally firm—say a case of tuna fish cans—and it works well, there’s a pleasing rhythmic pockita pockita sound as you bounce the gun from can to can. James had these ancient guns that if you pushed them too fast the actuator mechanism wouldn’t advance the sticker roll and the gun would jam. I always had to go as fast as possible though, so I was constantly pushing the limit.

One day I found a sleek new gun in a box that one of the concession vendors had left (another thing I learned, that much of the space in a grocery store is not run by the store, it’s leased to various merchants like Nabisco or Coke). This gun was German—heavy, oiled, precise, with a wide roll of stickers that caught much more easily on soft packages. It was an absurd joy to use. With it I could price as quick as I could twitch my fingers, and with my experience playing drums, that became fast. If James weren’t watching, I would get Sam to time me on a carefully arranged set of tuna fish. With the big ones, containing twenty-four twelve-ounce cans per case, my record was less than five seconds. But soon the stickers ran out and I was back as before.

Of course, it wasn’t all great. Once a month we had to do the recycling—every grocery store in New York is legally required to have and maintain bottle and can recycling machines, which produce barrels of broken glass weighing several hundred pounds and dozens of bags full of razor-sharp shredded aluminum. The glass was thankfully kept next to the machine on the main floor, but the aluminum was stored downstairs. The bags usually had several ounces of moldy fluid that had leaked into a coagulated mass of horror at the bottom of the pile.

James would hire this homeless guy named Fred to help us move the aluminum upstairs. Fred was a nice fellow, but he reeked. Him combined with the stench of the rotting beer made me retch more than a few times. However, he was immensely strong and had hands like Kevlar, which came in handy when the bag would tear apart on the way up the stairs. It was at least good exercise—the bags were heavy.
As was probably appropriate, it didn’t end well. The floor manager Susan—James was nominally the inventory manager—had direct control over the cashiers, and we didn’t get along that well. In June, when I was heading back to Colorado to get ready for Peace Corps, I told her I was leaving, less than a week before my last day. Susan wasn’t happy. “What, no two weeks’ notice?”

I let some of my entitlement show, I think. “It’s Key Food. James fires a cashier like every week.”

She got even angrier. “It may be Key Food, but it pays my mortgage.”

“It wouldn’t pay mine if I had one. I couldn’t pay a mortgage in this town if I worked here a hundred hours a week. Minimum wage is higher in my hometown of 8,000.” So she cut the rest of my hours and gave them to one of her favorites. James had promised to take me out to lunch on my last day, but never got that chance.

Some would accuse me of being a kind of tourist, basically a pith-helmeted imperialist taking notes on the local tribe. I suppose that is partly true. But it still defined my New York time. At Key Food I met some of the most interesting, honest people I have ever known, and had experiences I will never forget.