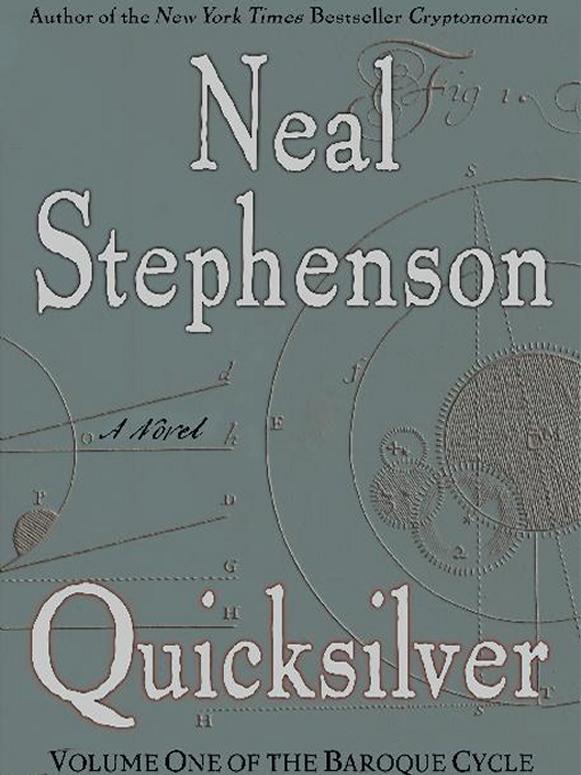 Summary: this trilogy, consisting of Quicksilver, The Confusion, and The System of the World, clocking in at nearly 3000 pages, is a great and entertaining look at the the birth of science and capitalism.  Highly recommended.

Stephenson combines what must have been enough meticulous research for several history PhD theses with a mischievous disregard for perfect accuracy.  Stephenson has an eye for interesting historical anecdotes (like the origin of the word "realize"), and though that can be a bit distracting at times, it's never boring.  Real historical figures are press-ganged (to use a favorite phrase in the series) into service as characters of all sorts.  Leibniz, Newton, Peter the Great, Louis XIV, William of Orange, Hooke, Huygens, John Wilkins, Ben Franklin, and John Locke are just a sample.  Leibniz and Newton in particular play major roles and have close relationships with the fictional characters (which are ancestors of characters in Cryptonomicon, a book set in the 20th century).

Despite the carefully constructed background, the book is not really self-consciously historical.  Characters often speak with a kind of ironic detachment characteristic of Stephenson and the modern age, and often make explicit their role in history in an unlikely way.  It's obvious that Stephenson is speaking through them, but the advantage of those creative liberties is that Stephenson's historiographical ideas (that the seeds of the IT revolution were sown back in the 17th century, for example) shine through with a lot more brilliance than would be possible with a strictly qualified and hedged history book.

A quick aside: a stranger, not-realistic role is played by Enoch Root, a character who also appears in Cryptonomicon.  I won't tell you what he does, just that it is decidedly not scientific.  It seemed like a cool plot point rather than a philosophical statement, but I was a bit unsure what to make of it.

I'm probably about the perfect target reader for the series, so it's no surprise that I liked it a lot.  Other less-geeky readers might not want to invest the time to get through them, but if you like science, technology, and Errol Flynn-style pirate swashbuckling, it's definitely worth a read.  About my only complaint was that Stephenson's ironic distance sometimes penetrates through into the descriptions to a point where it's difficult to figure out exactly what was happening.  Reading these on my Kindle might have been a disadvantage there, as I was constantly wanting to flip back through to reread previous section that I had neglected to bookmark, and couldn't manage it.  Still, worth a read.