I painted my roof 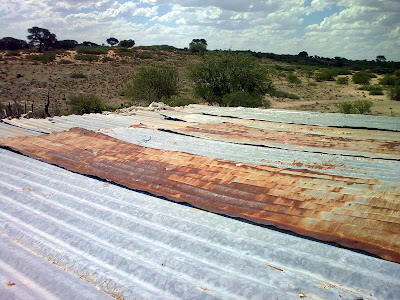 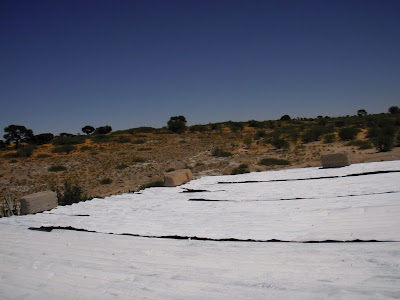 This was a pretty amateurish effort on my part. I didn't sand down the rust very much—well, cutting through the rust might have just worn new holes in my roof—I broke my brush halfway through and had to finish clutching the raw bristles like a Lascaux caveman, and I foolishly didn't start at the far edge and painted myself into a corner. Still, all things considered, the roof is significantly whiter than when I started.  More importantly, it is so far a lot cooler inside than yesterday.  By this time during the average day the roof metal would be so hot on the underside you could almost hear the sizzle touching it with your finger.  Now it's barely warm to the touch.  I reckon it will still be pretty hot during the late afternoon as the wall bricks absorb sunlight, but I think overall it's going to make things much better in my little shack.

I bought five liters of paint, which cost R250 and turned out to be way too much.  I still have about two-thirds left, so I might be traveling to neighboring volunteers to use up the rest.  When painting, the importance of getting an even coat was quickly replaced by just getting enough paint on the surface.  I found the best method to use a little can as a dipper to pour the paint directly on the roof, then smear it around with a brush.  It's not pretty, but the albedo is hugely improved.