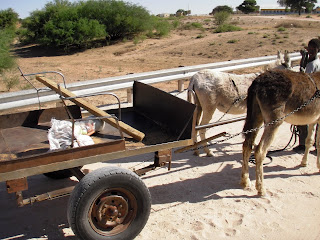 Donkey carts are ubiquitous in village life. They're like the jalopies of South Africa. Nearly everyone's got one (or three), they're rickety, and the kids beat the everlovin tar out of the things. Some of the donkeys in the traces are treated with relative kindness (usually by older men who seem to know how to train animals), but far too often I see people, usually younger boys, literally flaying the hide off their beasts. They seem to get the idea that if one is driving a cart, one must be constantly flogging: standing up, brandishing the whip in a sweeping circle, leaning into each stroke. I've seen boys drive their carts into the ditch, forcing their friends to get out and lead the donkeys backwards, still maintaining the constant whipping.

The other day walking across the bridge I saw one such boy coasting down the hill to the bridge at a good clip. One of his donkeys—on the right in the picture—either stumbled or came out of the harness and was run over by the cart. The axle passed over its hips, pinning it to the ground.  I went over to help, and found the cart much heavier than I was expecting.  Many carts are made of the removed bed of a bakkie (pickup truck), usually stripped down and half rusted through, and are therefore relatively light.  You can see in the picture this one is made out of welded plate steel.  It was incredibly heavy.  I'm pretty strong (for a PCV anyway), and it was nearly all I (with the help of some Grade 4s) could do to lift the thing and shift it enough to allow the donkey to squirm out.

Luckily the donkey's legs didn't seem to be broken, and so the boy just strapped it back in and, with a few blows of the whip, they were back on their way.